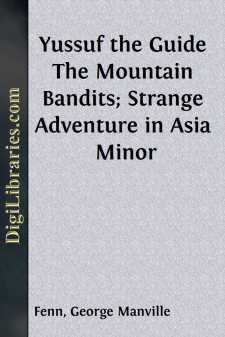 “But it seems so shocking, sir.”

“Yes, madam,” said the doctor, “very sad indeed. You had better get that prescription made up at once.”

“And him drenched with physic!” cried Mrs Dunn; “when it doesn’t do him a bit of good.”

“Not very complimentary to me, Mrs Dunn,” said the doctor smiling.

“Which I didn’t mean any harm, sir; but wouldn’t it be better to let the poor boy die in peace, instead of worrying him to keep on taking physic?”

“And what would you and his friends say if I did not prescribe for him?”

“I should say it was the best thing, sir; and as to his friends, why, he hasn’t got any.”

“What! the lawyer, sir? I don’t call him a friend. Looks after the money his poor pa left, and doles it out once a month, and comes and takes snuff and blows his nose all over the room, as if he was a human trombone, and then says, ‘hum!’ and ‘ha!’ and ‘send me word how he is now and then,’ and goes away.”

“But his father’s executor, Professor Preston?”

“Lor’ bless the man! don’t talk about him. I wrote to him last week about how bad the poor boy was; and he came up from Oxford to see him, and sat down and read something out of a roll of paper to him about his dog.”

“Yes, sir, about his dog Pompey, and then about tombs—nice subject to bring up to a poor boy half-dead with consumption! And as soon as he had done reading he begins talking to him. You said Master Lawrence was to be kept quiet, sir?”

“Well, if he didn’t stand there sawing one of his hands about and talking there, shouting at the poor lad as if he was in the next street, or he was a hout-door preacher, till I couldn’t bear it any longer, and I made him go.”

“Ah, I suppose the professor is accustomed to lecture.”

“Then he had better go and lecture, sir. He sha’n’t talk my poor boy to death.”

“Well, quiet is best for him, Mrs Dunn,” said the doctor smiling at the rosy-faced old lady, who had turned quite fierce; “but still, change and something to interest him will do good.”

“Well, yes, Mrs Dunn, I will be frank with you—more good than physic. What did Mr Burne say about the poor fellow going to Madeira or the south of France?”

“Said, sir, that he’d better take his Madeira out of a wine-glass and his south of France out of a book. I don’t know what he meant, and when I asked him he only blew his nose till I felt as if I could have boxed his ears. But now, doctor, what do you really think about the poor dear? You see he’s like my own boy. Didn’t I nurse him when he was a baby, and didn’t his poor mother beg of me to always look after him? And I have. Nobody can’t say he ever had a shirt with a button off, or a hole in his clean stockings, or put on anything before it was aired till it was dry as a bone. But now tell me what you really think of him.”

“That I can do nothing whatever, Mrs Dunn,” said the doctor kindly....