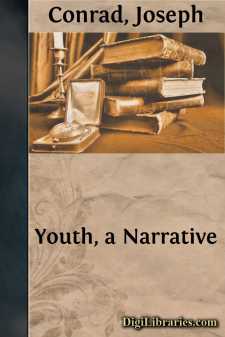 This could have occurred nowhere but in England, where men and sea interpenetrate, so to speak—the sea entering into the life of most men, and the men knowing something or everything about the sea, in the way of amusement, of travel, or of bread-winning.

We were sitting round a mahogany table that reflected the bottle, the claret-glasses, and our faces as we leaned on our elbows. There was a director of companies, an accountant, a lawyer, Marlow, and myself. The director had been a Conway boy, the accountant had served four years at sea, the lawyer—a fine crusted Tory, High Churchman, the best of old fellows, the soul of honour—had been chief officer in the P. & O. service in the good old days when mail-boats were square-rigged at least on two masts, and used to come down the China Sea before a fair monsoon with stun'-sails set alow and aloft. We all began life in the merchant service. Between the five of us there was the strong bond of the sea, and also the fellowship of the craft, which no amount of enthusiasm for yachting, cruising, and so on can give, since one is only the amusement of life and the other is life itself.

Marlow (at least I think that is how he spelt his name) told the story, or rather the chronicle, of a voyage:

"Yes, I have seen a little of the Eastern seas; but what I remember best is my first voyage there. You fellows know there are those voyages that seem ordered for the illustration of life, that might stand for a symbol of existence. You fight, work, sweat, nearly kill yourself, sometimes do kill yourself, trying to accomplish something—and you can't. Not from any fault of yours. You simply can do nothing, neither great nor little—not a thing in the world—not even marry an old maid, or get a wretched 600-ton cargo of coal to its port of destination.

"It was altogether a memorable affair. It was my first voyage to the East, and my first voyage as second mate; it was also my skipper's first command. You'll admit it was time. He was sixty if a day; a little man, with a broad, not very straight back, with bowed shoulders and one leg more bandy than the other, he had that queer twisted-about appearance you see so often in men who work in the fields. He had a nut-cracker face—chin and nose trying to come together over a sunken mouth—and it was framed in iron-grey fluffy hair, that looked like a chin strap of cotton-wool sprinkled with coal-dust. And he had blue eyes in that old face of his, which were amazingly like a boy's, with that candid expression some quite common men preserve to the end of their days by a rare internal gift of simplicity of heart and rectitude of soul. What induced him to accept me was a wonder. I had come out of a crack Australian clipper, where I had been third officer, and he seemed to have a prejudice against crack clippers as aristocratic and high-toned. He said to me, 'You know, in this ship you will have to work.' I said I had to work in every ship I had ever been in. 'Ah, but this is different, and you gentlemen out of them big ships;......