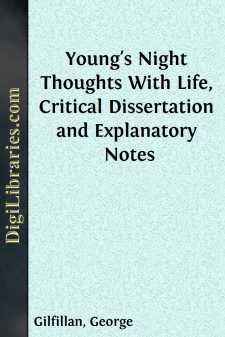 ON THE LIFE AND POETIC GENIUS OF EDWARD YOUNG.

Between the period of George Herbert, and that of Edward Young, some singular changes had taken place in British poetry as well as in British manners, politics, and religion. There had passed over the land the thunderstorm of the Puritanic Revolt, which had first clouded and then cleared, for a season, the intellectual and moral horizon. The effect of this on poetry was, for such fugitive though felicitous hymns as those of Herbert, to substitute the epic unities and grand choral harmonies of Milton. Then came the Restoration—the Apotheosis of falsehood; including in that term false principles, false politics, and false taste. Britain became the degraded slave of France, at once in laws and in literature. Dryden, indeed, maintained, in some measure, the character and the taste of his nation, but he stood almost alone. To him succeeded Addison and Pope, both gifted but both timid men, whose genius, great as it was, never, or rarely, ventured on original and daring flights, and who seemed always to be haunted by the fear of French criticism. Pope, especially, lent all his influence to confirm and seal the power of a foreign code of literary laws; and so general and so deep was the submission, that it is to us one of the strongest proofs of Edward Young’s genius, that he ventured, in that polished but powerless era, to uplift a native voice of song, and not to uplift it in vain; for, if he did not absolutely make a revolution, [vi] or found a school, he yet established himself, and left his poetry as a glorious precedent to all who should afterwards be so hardy as to “go and do likewise.”

Edward Young was born in June 1681 (according to some, two years earlier), in the village of Upham, Hampshire. His father was rector of the parish, and is represented as a man of great learning and abilities. He was the author of some volumes of sermons, and, on account of their merit, and through the patronage of Lord Bradford, he was appointed chaplain to King William, and Dean of Salisbury. He died in 1705, in the sixty-third year of his age, and Bishop Burnet, the Sunday after his decease, pronounced a glowing panegyric on his character, in a funeral sermon delivered in the Cathedral.

Edward was sent to Winchester School, and thence to Oxford, where he obtained a law fellowship in All-Souls College, and afterwards took successively the degrees of Bachelor and Doctor of Civil Law, besides obtaining a fellowship in 1706. When the Codrington Library was founded, he was appointed to deliver the Latin oration. It was published, but met with a frigid reception, being full of conceits and puerilities, and the author wisely omitted it from his collected works. Little else is known of his career at College. He is said to have blended fits of study with frequent dissipation. When he relaxed, it was in the company of the infamous Duke of Wharton, who patronised, corrupted, and laughed at him. When he studied, he would shut his windows, create around him an artificial night, and make it more hideous by piling up skulls, cross-bones, and instruments of death in his room....