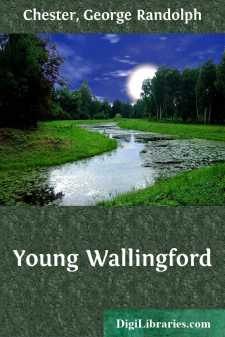 A natural again!” exulted Jonathan Reuben Wix, as the dice bounded from his plump hand and came to rest upon the billiard-table in Leiniger’s Select Café, with a five and a deuce showing. “Somebody ring the bell for me, because I’m a-going to get off.”

He was a large young man in every dimension, broad of chest and big and pink of face and jovial of eye, and he chuckled as he passed the dice to his left-hand neighbor. There was a hundred dollars on the table and he gathered it up in a wad.

“Good-by, boys, and many merry thanks for these kind contributions,” he bantered as he stuffed the money into his pocket. “It’s me for Bunkville-amidst-the-ferry-boats, on the next Limited.”

He was back in less than three days, having spent just twenty-four hours in New York. The impulsively decided journey was nothing unusual for him, but it had an intimate bearing upon his future in that it forced upon him the confidence of secretive Clifford Gilman, who lived next door.

“Home so soon?” inquired Gilman in surprise. “They must have robbed you!”

“Robbed!” laughed Wix. “I should say not. I didn’t waste a cent. Railroad ticket, sleepers, meals and extra fare on the Limited cost twenty-five each way. That left fifty. My room at the hotel cost five dollars. Breakfast was two dollars; morning drive through Central Park, four; lunch, three-fifty; matinée ticket, with cab each way, five; dinner, eight, with the ordinary champagne of commerce; theater and cab hire, five-fifty; supper, twelve, including a bottle of real champagne at eight dollars, and the balance in tips.”

Clifford gasped as he hungrily reviewed these luscious items.

Young Gilman was not one of those who had been in the game by which Wix had won a hundred. He never played dice, did young Gilman, nor poker, nor bet on a horse race, nor drank, nor even smoked; but wore curly, silken sideburns, and walked up the same side of Main Street every morning to the bank, with his lunch in a little imitation-leather box. He walked back down the same side of Main Street every evening. If he had happened to take the other side on any morning, before noon there would have been half a dozen conservative depositors to ask old Smalley, who owned the bank, why Clifford had crossed over.

Young Gilman was popularly regarded as a “sissy,” but that he had organs, dimensions and senses, and would bleed if pricked, was presently evidenced to Mr. Wix in a startling proposition.

“Look here, Wix,” said Gilman, lowering his voice to a mystery-fraught undertone, “I’m going to take a little trip and I want you to come along.”

“Behave!” admonished Wix. “It would be awful reckless in me to go with a regular little devil like you; and besides, sarsaparilla and peanuts tear up my system so.”

“I’ve got three hundred dollars,” stated Gilman calmly. “Does that sound like sarsaparilla and peanuts?”

“I’m listening,” said Wix with sudden interest. “Where did you get it, mister?”

Gilman looked around them nervously, then spoke in an eager whisper, clutching Wix by the arm.

“Saved it up, but like you do. I saw the wisdom of your way long ago. Old Smalley makes me put half my salary in the bank, but I pinch out a little more than that, and every time I get twenty dollars on the side, I invest it in margin wheat, by mail. Most often I lose, but when I do win I keep on until it amounts to something. Of course, I’m laying myself open to you in this. If old Smalley found it out he’d discharge me on the spot.”

“I know,” he agreed. “My mother once wanted me to apply for that job. I went to see old Smalley, and the first thing he did was to examine my fingers for cigarette stains....