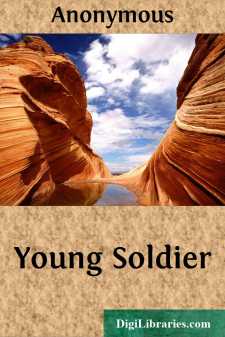 Look at this young ensign, how fine he looks with his banner and his sword. Wouldn’t you like to be a soldier? to fight for your country?

This soldier has got leave of absence for a few days, and has joined a party of hunters. Here he is with his horn, whip, cap, and dog.

Here is an old Turkish officer, who is just going to fight; see he has drawn his sabre, and is holding out his shield to defend himself.

This is a soldier returning from the hunt, as it is time for him to join his regiment; which has received orders to march to another barracks.

Here is a soldier going to battle with his knapsack on his back, and his gun in his hand, he is going to meet his fellow soldiers.

This is a soldier who fights with a spear. In olden times, spears and arrows, were used in war; but now, guns, rifles, cannons and swords are used.

This is an officer of a company of soldiers, he has drawn his men up in a line, and is now telling them how they must act when they are in battle.

This man is a Herald; it is his duty to proclaim the commander’s orders to the soldiers throughout the camp. See, he has a trumpet.

Publish, and keep on sale, wholesale and retail, the most extensive assortment of Juvenile Works in America.

The above are beautifully colored, and got up in a superior manner.

The entire variety at the lowest cash prices....