Young Peoples' History of the War with Spain 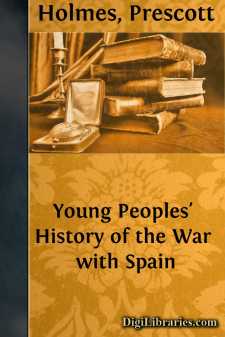 CHAPTER I. THE CAUSE OF THE WAR.

On April 21st, 1898, a war began between the United States and Spain. All the other countries of the world felt an interest in it, but did not take any part in it. They were what we call "neutral"—that is, they did not help either side.

As soon as the war was proclaimed a great wave of excitement swept through the United States, from shore to shore. Flags were hung out in every city and town; thousands of men offered to serve in the army—volunteers they were called; and many persons offered to help in other ways. The people were not glad that war had begun, but they felt that their country was doing right, and that they ought to support her efforts.

And what was the cause of the war? Spain, a large country across the Atlantic Ocean, in the southwestern part of Europe, owned some of the islands, called "West Indies," near the United States. Spain had been unjust and cruel to the people living in one of these islands, for many years. Several times the unhappy islanders tried to drive the Spanish from the island, and set up a government of their own, but Spain sent so many soldiers there that they could not get their freedom. They fought bravely, however, but matters kept getting worse and worse, and at last Spain sent a very cruel general to take charge of affairs in the island. His name was Weyler, and he determined to conquer the islanders. After a while he found he could not do it by fighting them, so he sent his soldiers to drive those who were not fighting away from their homes and farms and make them live in or near the large cities. When he had done this, the people had no way to earn money to buy food for themselves and their families, and soon they began to get sick and to die of starvation. The cruel Weyler would not give them anything to eat, and so they died by thousands.

When this dreadful state of affairs became known in the United States, kind people sent several ship-loads of food and medicines and clothing to the sufferers. This did a great deal of good, but all the poor people could not be reached and they continued to die. Finally, the United States told Spain that she ought not to have such a cruel man at the head of affairs, and after a while Spain sent another general to take his place. This new governor's name was Blanco, and he really tried to help the poor people, but Spain had very little money to send him to buy food for them, and so they went on dying. The soldiers, too, were in a very bad condition; they had not been paid for a great many months; they did not have enough to eat, and so they too sickened and died by thousands. You can see that unless something was done to help the poor people, they would all die and their beautiful island would become a wilderness.

Besides being very proud, Spain was very poor. She had spent millions of dollars trying to conquer the islanders, and had no money to buy food for the sufferers that she had driven from their homes and huddled like cattle in yards and gloomy inclosures....