You Too Can Be A Millionaire 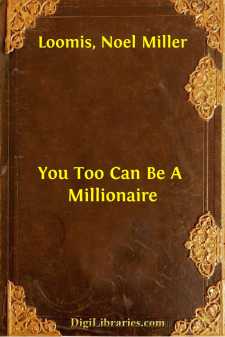 Mark Renner looked anxiously backward as he ran up the street to the place where the faded gold lettering on one window said "Jewelry." That would be a good place to hide, he thought. Most of the plate-glass windows and doors along the street were broken out as in fact they were everywhere, and had been for twenty years—but one of the jewelry windows and the door, protected by iron grating, were still whole and would help to conceal him.

With one final glance back at the corner, he climbed the grating, scuttled across it, and dropped down. Then, keeping low, he ducked in among the dusty old counters and stopped abruptly, listening.

He heard Conley's slow, slapping footsteps as the tall man rounded the corner and came up the street. He forced himself to breathe softly in spite of the pounding of his heart. The dust rose a little around him and got in his nostrils and he wanted to sneeze, but by sheer willpower he choked it down.

Conley was from the Machine—Central Audit Bureau—and the Machine knew by now that Mark was three thousand points in the red. Three thousand points—when you were supposed to be always within one day's point of a balance. You were allowed twelve hundred points a day, so Mark was now two and a half days in debit.

He'd been walking the streets in a sort of daze, signing slips right and left while his own pad of slips stayed in his pocket. He hadn't cared, either, until now, because in this brave new world of the one freedom—freedom from work—he was abominably unhappy.

Everybody struggled all day to get enough points to stay even with Central, and what good did it do them? You got even one day, but the next day you had to start all over. There wasn't any point to it. So he'd said to hell with it, and for five days now he'd ignored the Machine entirely except to line up automatically once a day at the concourse to have his card audited. And for five straight days the balance had been in red.

Then, today, he had seen Conley on the street, coming toward him. All of a sudden Mark had been scared. He didn't know what Central would do to him—nobody knew—but he didn't want to find out, either. He ran from Conley.

Now he crouched in the dust behind an empty counter while Conley's footsteps approached. He held his breath when they got close, and when they passed the broken window he was very thankful.

It was late afternoon and he thought Conley would go back to Central. Nobody knew much about Conley except that he represented the Machine and that he seemed to disappear within it every afternoon.

So, presently, Mark crawled out of the broken window and walked down to Main Street. He looked carefully right and left and then, not seeing Conley's tall form above the traffic, he wandered slowly down the street, trying to figure things out. Why wasn't there anything worth while to do? What was the reason for all the broken windows and empty stores? Had there once been places where people could buy things like food and clothes? Maybe—before Central Audit Bureau had come into existence. Or had Central always been there?

Mark saw the old lady sitting in the wheel-chair. He turned out absently to walk by her. He saw her put her foot in his way but his brain wasn't working. He stumbled over her foot.

Instantly the old lady half arose from her chair as if in pain, shrieking and brandishing her cane, the leg held stiffly out in front of her. "You've injured me," she shrieked in a raucous voice....