You Never Know Your Luck; being the story of a matrimonial deserter. Complete 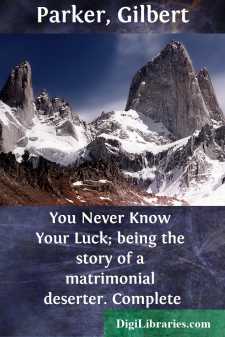 If you had stood on the borders of Askatoon, a prairie town, on the pathway to the Rockies one late August day not many years ago, you would have heard a fresh young human voice singing into the morning, as its possessor looked, from a coat she was brushing, out over the "field of the cloth of gold," which your eye has already been invited to see. With the gift of singing for joy at all, you should be able to sing very joyously at twenty-two. This morning singer was just that age; and if you had looked at the golden carpet of wheat stretching for scores of miles, before you looked at her, you would have thought her curiously in tone with the scene. She was a symphony in gold—nothing less. Her hair, her cheeks, her eyes, her skin, her laugh, her voice they were all gold. Everything about her was so demonstratively golden that you might have had a suspicion it was made and not born; as though it was unreal, and the girl herself a proper subject of suspicion. The eyelashes were so long and so black, the eyes were so topaz, the hair was so like such a cloud of gold as would be found on Joan of Are as seen by a mediaeval painter, that an air of faint artificiality surrounded what was in every other way a remarkable effort of nature to give this region, where she was so very busy, a keynote.

Poseurs have said that nature is garish or exaggerated more often than not; but it is a libel. She is aristocratic to the nth degree, and is never over done; courage she has, but no ostentation. There was, however, just a slight touch of over-emphasis in this singing-girl's presentation—that you were bound to say, if you considered her quite apart from her place in this nature-scheme. She was not wholly aristocratic; she was lacking in that high, social refinement which would have made her gold not so golden, her black eyelashes not so black. Being unaristocratic is not always a matter of birth, though it may be a matter of parentage.

Her parentage was honest and respectable and not exalted. Her father had been an engineer, who had lost his life on a new railway of the West. His widow had received a pension from the company insufficient to maintain her, and so she kept boarders, the coat of one of whom her daughter was now brushing as she sang. The widow herself was the origin of the girl's slight disqualification for being of that higher circle of selection which nature arranges long before society makes its judicial decision. The father had been a man of high intelligence, which his daughter to a real degree inherited; but the mother, as kind a soul as ever lived, was a product of southern English rural life—a little sumptuous, but wholesome, and for her daughter's sake at least, keeping herself well and safely within the moral pale in the midst of marked temptations. She was forty-five, and it said a good deal for her ample but proper graces that at forty-five she had numerous admirers. The girl was English in appearance, with a touch perhaps of Spanish—why, who can say?...