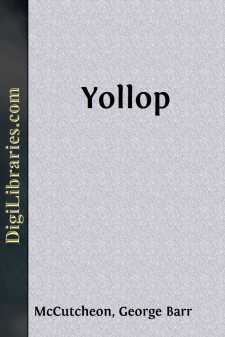 In the first place, Mr. Yollop knew nothing about firearms. And so, after he had overpowered the burglar and relieved him of a fully loaded thirty-eight, he was singularly unimpressed by the following tribute from the bewildered and somewhat exasperated captive:

"Say, ain't you got any more sense than to tackle a man with a gun, you chuckle-headed idiot?" (Only he did not say "chuckle-headed," and he inserted several expletives between "say" and "ain't.")

The dazed intruder was hunched limply, in a sitting posture, over against the wall, one hand clamped tightly to his jaw, the other being elevated in obedience to a command that had to be thrice repeated before it found lodgment in his whirling brain. Mr. Yollop, who seemed to be satisfied with the holding up of but one hand, cupped his own hand at the back of one ear, and demanded querulously:

"Don't say deef. Say deaf,—as if it were spelled d-e-double f.Yes,—I am a little hard of hearing."

"Now, how the hell did you hear—I say, HOW DID YOU HEAR ME IN THEROOM, if it's a fair question?"

"If you've got anything in your mouth, spit it out. I can't make out half what you say. Sounds like 'ollo—ollo—ollo'!"

The thief opened his mouth and with his tongue instituted a visible search for the obstruction that appeared to annoy Mr. Yollop.

"They're all here except the one I had pulled last year," he announced vastly relieved. A sharp spasm of pain in his jaw caused him to abruptly take advantage of a recent discovery; and while he was careful to couch his opinions in an undertone, he told Mr. Yollop what he thought of him in terms that would have put the hardiest pirate to blush. Something in Mr. Yollop's eye, however, and the fidgety way in which he was fingering the trigger of the pistol, moved him to interrupt a particularly satisfying paean of blasphemy by breaking off short in the very middle of it to wonder why in God's name he hadn't had sense enough to remember that all deaf people are lip-readers.

"Spit it out!" repeated Mr. Yollop, with energy. "Don't talk with your mouth full. I can't understand a word you say."

This was reassuring but not convincing. There was still the ominous glitter in the speaker's eye to be reckoned with. The man on the floor took the precaution to explain: "I hope "you didn't hear what I was callin' myself." He spoke loudly and very distinctly.

"That's better," said Mr. Yollop, his face brightening. "I was 'afraid my hearing had got worse without my knowing it. All you have to do is to enunciate distinctly and speak slowly like that,—as if you were isolating the words,—so to speak,—and I can make out everything you say. What were you calling yourself?"

"Oh, just a lot of names. I'd sooner not repeat 'em if there's any women in the house."

"Well, bless my soul, that's uncommonly thoughtful of you. My sister and her young daughter are here to spend the holidays with me. They sleep at the back of the apartment....