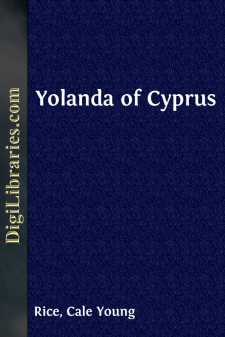 Scene: A dim Hall, of blended Gothic and Saracenic styles, in the Lusignan Castle, on the island of Cyprus near Famagouste. Around the walls, above faint frescoes portraying the deliverance of Jerusalem by the Crusaders, runs a frieze inlaid with the coats-of-arms of former Lusignan kings. On the left, and back, is a door hung with heavy damask, and in the wall opposite, another. Farther down on the right a few steps, whose railing supports a Greek vase with jasmine, lead through a chapel to the sleeping apartments. In the rear, on either side, are guled lattice windows, and in the centre an open grated door, looking upon a loggia, and, across the garden below, over the moonlit sea. Seats are placed about, and, forward, a divan with rich Turkish coverings. A table with a lighted cross-shaped candlestick is by the door, left; and a lectern with a book on it, to the front, right. As the curtain rises, the Women, except Civa, lean wearily on the divan, and Halil near is singing dreamily:

[The music falls and all seem yielding to sleep. Suddenly there are hoof-beats and sounds at the gates below. Halil springs up.

Some one is come. Alessa. Boy, Halil, who? Halil. Up, up!Perhaps lord Renier—No: I will learn.

[He runs to curtains and looks.

It is Olympio! Olympio!From Famagouste and lord Amaury! Mauria. Ah!And comes he here? Halil. As he were lord of skies!To lady Yolanda, by my lute! Maga. Where is she? Alessa. I do not know; perhaps, her chamber. Mauria. Stay:His word may be of the Saracens. Halil (calling). Oho!

[He admits Olympio, who enters insolently down. All press round him gaily.

Mauria. Well, what, Olympio, from Famagouste?What tidings? tell us. Maga. See, his sword! Olympio. Stand off. Mauria. The tidings, then, the tidings! Olympio. None—for women. Mauria. So-ho, my Cupid? None of the Saracens?Of the squadron huddling yesterday for havenAt Keryneia? Olympio. Who has told you? Mauria. Who?A hundred galleys westing up the wind,Scenting the shore, but timorous as hounds.A gale—and twenty down! Maga. The rest are flown? Olympio. Ask Zeus, or ask, to-morrow, lord Amaury,Or, if he comes, to-night. To lady YolandaI'm sent and not to tattle, silly, here.

[He starts off, but is arrested by laughter within. It is Civa who enters, holding up a parchment.

Civa. How, Olympio!Stay you, and hear!—May never virgin love him!Gone as a thistle! (turns). Mauria. Pouf! (laughs). Alessa (to Civa). Now what have you? Civa. Verses! found in the garden. Verses! verses!On papyrus of Paphos. O, to read!But you, Alessa—! Alessa (takes them). In the garden? Civa. ByThe fountain cypress, at the marble feetOf chaste Diana!...
Show more
Show less