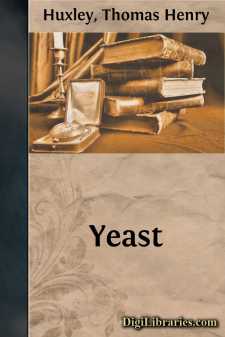 I HAVE selected to-night the particular subject of Yeast for two reasons—or, rather, I should say for three. In the first place, because it is one of the simplest and the most familiar objects with which we are acquainted. In the second place, because the facts and phenomena which I have to describe are so simple that it is possible to put them before you without the help of any of those pictures or diagrams which are needed when matters are more complicated, and which, if I had to refer to them here, would involve the necessity of my turning away from you now and then, and thereby increasing very largely my difficulty (already sufficiently great) in making myself heard. And thirdly, I have chosen this subject because I know of no familiar substance forming part of our every-day knowledge and experience, the examination of which, with a little care, tends to open up such very considerable issues as does this substance—yeast.

In the first place, I should like to call your attention to a fact with which the whole of you are, to begin with, perfectly acquainted, I mean the fact that any liquid containing sugar, any liquid which is formed by pressing out the succulent parts of the fruits of plants, or a mixture of honey and water, if left to itself for a short time, begins to undergo a peculiar change. No matter how clear it might be at starting, yet after a few hours, or at most a few days, if the temperature is high, this liquid begins to be turbid, and by-and-by bubbles make their appearance in it, and a sort of dirty-looking yellowish foam or scum collects at the surface; while at the same time, by degrees, a similar kind of matter, which we call the "lees," sinks to the bottom.

The quantity of this dirty-looking stuff, that we call the scum and the lees, goes on increasing until it reaches a certain amount, and then it stops; and by the time it stops, you find the liquid in which this matter has been formed has become altered in its quality. To begin with it was a mere sweetish substance, having the flavour of whatever might be the plant from which it was expressed, or having merely the taste and the absence of smell of a solution of sugar; but by the time that this change that I have been briefly describing to you is accomplished the liquid has become completely altered, it has acquired a peculiar smell, and, what is still more remarkable, it has gained the property of intoxicating the person who drinks it. Nothing can be more innocent than a solution of sugar; nothing can be less innocent, if taken in excess, as you all know, than those fermented matters which are produced from sugar. Well, again, if you notice that bubbling, or, as it were, seething of the liquid, which has accompanied the whole of this process, you will find that it is produced by the evolution of little bubbles of air-like substance out of the liquid; and I dare say you all know this air-like substance is not like common air; it is not a substance which a man can breathe with impunity. You often hear of accidents which take place in brewers' vats when men go in carelessly, and get suffocated there without knowing that there was anything evil awaiting them. And if you tried the experiment with this liquid I am telling of while it was fermenting, you would find that any small animal let down into the vessel would be similarly stifled; and you would discover that a light lowered down into it would go out. Well, then, lastly, if after this liquid has been thus altered you expose it to that process which is called distillation; that is to say, if you put it into a still, and collect the matters which are sent over, you obtain, when you first heat it, a clear transparent liquid, which, however, is something totally different from water; it is much lighter; it has a strong smell, and it has an acrid taste; and it possesses the same intoxicating power as the original liquid, but in a much more intense degree....