Wyoming, a Story of the Outdoor West 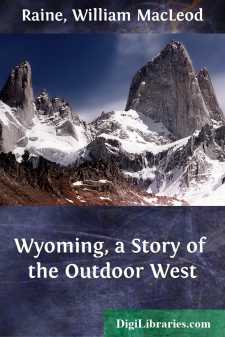 An automobile shot out from a gash in the hills and slipped swiftly down to the butte. Here it came to a halt on the white, dusty road, while its occupant gazed with eager, unsated eyes on the great panorama that stretched before her. The earth rolled in waves like a mighty sea to the distant horizon line. From a wonderful blue sky poured down upon the land a bath of sunbeat. The air was like wine, pure and strong, and above the desert swam the rare, untempered light of Wyoming. Surely here was a peace primeval, a silence unbroken since the birth of creation.

It was all new to her, and wonderfully exhilarating. The infinite roll of plain, the distant shining mountains, the multitudinous voices of the desert drowned in a sunlit sea of space—they were all details of the situation that ministered to a large serenity.

And while she breathed deeply the satisfaction of it, an exploding rifle echo shattered the stillness. With excited sputtering came the prompt answer of a fusillade. She was new to the West; but some instinct stronger than reason told the girl that here was no playful puncher shooting up the scenery to ventilate his exuberance. Her imagination conceived something more deadly; a sinister picture of men pumping lead in a grim, close-lipped silence; a lusty plainsman, with murder in his heart, crumpling into a lifeless heap, while the thin smoke-spiral curled from his hot rifle.

So the girl imagined the scene as she ran swiftly forward through the pines to the edge of the butte bluff whence she might look down upon the coulee that nestled against it. Nor had she greatly erred, for her first sweeping glance showed her the thing she had dreaded.

In a semicircle, well back from the foot of the butte, half a dozen men crouched in the cover of the sage-brush and a scattered group of cottonwoods. They were perhaps fifty yards apart, and the attention of all of them was focused on a spot directly beneath her. Even as she looked, in that first swift moment of apprehension, a spurt of smoke came from one of the rifles and was flung back from the forked pine at the bottom of the mesa. She saw him then, kneeling behind his insufficient shelter, a trapped man making his last stand.

From where she stood the girl distinguished him very clearly, and under the field-glasses that she turned on him the details leaped to life. Tall, strong, slender, with the lean, clean build of a greyhound, he seemed as wary and alert as a panther. The broad, soft hat, the scarlet handkerchief loosely knotted about his throat, the gray shirt, spurs and overalls, proclaimed him a stockman, just as his dead horse at the entrance to the coulee told of an accidental meeting in the desert and a hurried run for cover.

That he had no chance was quite plain, but no plainer than the cool vigilance with which he proposed to make them pay. Even in the matter of defense he was worse off than they were, but he knew how to make the most of what he had; knew how to avail himself of every inch of sagebrush that helped to render him indistinct to their eyes....