Wrecked but not Ruined 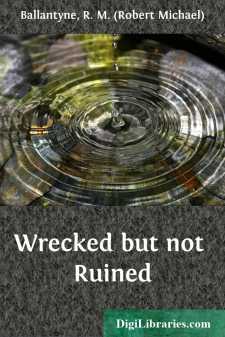 On the northern shores of the Gulf of Saint Lawrence there stood, not very long ago, a group of wooden houses, which were simple in construction and lowly in aspect. The region around them was a vast uncultivated, uninhabited solitude. The road that led to them was a rude one. It wound round a rugged cliff, under the shelter of which the houses nestled as if for protection from the cold winds and the snowdrifts that took special delight in revelling there.

This group of buildings was, at the time we write of, an outpost of the fur-traders, those hardy pioneers of civilisation, to whom, chiefly, we are indebted for opening up the way into the northern wilderness of America. The outpost was named the Cliff after the bold precipice near the base of which it stood. A slender stockade surrounded it, a flag-staff rose in the centre of it, and a rusty old ship’s carronade reared defiantly at its front gate. In virtue of these warlike appendages the place was sometimes styled “the Fort.”

When first established, the Cliff Fort lay far beyond the outmost bounds of civilised life, but the progress of emigration had sent forward wave after wave into the northern wilderness, and the tide rose at last until its distant murmur began to jar on the ears of the traders in their lonely dwelling; warning them that competition was at hand, and that, if they desired to carry on the trade in peace, they must push still further into the bush, or be hopelessly swallowed up in the advancing tide.

When the unwelcome sounds of advancing civilisation first broke the stillness of this desolate region, the chief of the trading-post was seated at breakfast with his clerk. He was a tall, good-looking, young Englishman, named Reginald Redding. The clerk, Bob Smart, was a sturdy youth, who first saw the light among the mountains of Scotland. Doubtless he had been named Robert when baptised, but his intimates would not have understood you had you mentioned him by that name.

Bob had just helped Reginald to the wing of a salt goose, and was about to treat himself to a leg of the same when the cook entered.

This cook was a man. It may also be said with truth that he was more than most men. At the outpost men were few, and of women there were none. It may be imagined, then, that the cook’s occupations and duties were numerous. François Le Rue, besides being cook to the establishment, was waiter, chambermaid, firewood-chopper, butcher, baker, drawer-of-water, trader, fur-packer, and interpreter. These offices he held professionally. When “off duty,” and luxuriating in tobacco and relaxation, he occupied himself as an amateur shoemaker, tailor, musician, and stick-whittler, to the no small advantage of himself and his fellow-outcasts, of whom there were five or six, besides the principals already mentioned.

Le Rue’s face bore an expression of dissatisfaction and perplexity as he entered the hall.

“Oh, Monsieur Redding,” he exclaimed, “dem squatters, de black scoundrils what is be called Macklodds has bin come at last.”