Wreaths of Friendship A Gift for the Young 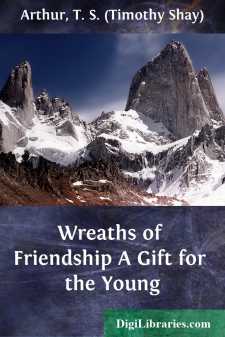 WHAT SHALL WE BUILD?

our children were playing on the sea-shore. They had gathered bright pebbles and beautiful shells, and written their names in the pure, white sand; but at last, tired of their sport, they were about going home, when one of them, as they came to a pile of stones, cried out:

"Oh! let us build a fort; and we will call that ship away out there, an enemy's vessel, and make believe we are firing great cannon balls into her!"

"Yes, yes! let us build a fort," responded Edward, the other lad.

And the two boys—for two were boys and two girls—ran off to the pile of stones, and began removing them to a place near the water.

WHAT SHALL WE BUILD?

"Yes; we will build a fort," returned the boys. "What else can we build? You wouldn't put a house down here upon the water's edge?"

"No; but I'll tell you what we can build, and it will be a great deal better than a fort."

"A light-house," said the girls; "and that will be just as much in place on the edge of the sea as a fort. We can call the ship yonder a vessel lost in the darkness, and we will hang out a light and direct her in the true way. Won't that be much better than to call her an enemy, and build a fort to destroy her? See how beautifully she sits upon and glides over the smooth water! Her sails are like the open wings of a bird, and they bear her gracefully along. Would it not be cruel to shoot great balls into her sides, tear her sails to pieces, and kill the men who are on board of her? Oh! I am sure it would make us all happier to save her when in darkness and danger. No, no; let us not build a fort, but a light-house; for it is better to save than to destroy."

The girls spoke with tenderness and enthusiasm, and their words reached the better feelings of their companions.

Yes, it is much better to save than to destroy. Think of that, children, and let it go with you through life. Be more earnest to save your friends than to destroy your enemies. And yet, when a real enemy comes, and seeks to do evil, be brave to resist him.

THE TWO COUSINS; OR, HOW TO ACT WHEN "THINGS GO WRONG."

" here, mother, I knew it would be so. Lucy Wallace has just sent over to tell me she can't walk out in the woods with me. There's no use in my trying to please any body—there's no use in it. I'm an odd sort of a creature, it seems. Nobody loves me. It always was so. Oh, dear! I wish I knew what I had done to make the girls hate me so!"

This not very good-natured speech was made by a little girl, whom I shall call Angeline Standish. She was some ten or twelve years old, as near as I can recollect. Perhaps my readers would like to know something about the occasion which called for this speech; but it is a long story, and hardly worth telling. The truth is, when little boys and girls get very angry, or peevish, or fretful, they sometimes blow out a great deal of ill-humor, something after the manner that an overcharged steam boiler lets off steam—with this difference, however, that the steam boiler gets cooler by the operation, while the boy or girl gets more heated....