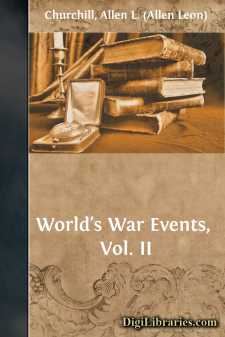 The Battle of Verdun, which continued through from February 21, 1916, to the 16th of December, ranks next to the Battle of the Marne as the greatest drama of the world war. Like the Marne, it represents the checkmate of a supreme effort on the part of the Germans to end the war swiftly by a thunderstroke. It surpasses the Battle of the Marne by the length of the struggle, the fury with which it was carried on, the huge scale of the operations. No complete analysis of it, however, has yet been published—only fragmentary accounts, dealing with the beginning or with mere episodes. Neither in France nor in Germany, up to the present moment, has the whole story of the battle been told, describing its vicissitudes, and following step by step the development of the stirring drama. That is the task I have set myself here.

German successes in France. Preparations for a great offensive.

The year 1915 was rich in successes for the Germans. In the West, thanks to an energetic defensive, they had held firm against the Allies' onslaughts in Artois and in Champagne. Their offensive in the East was most fruitful. Galicia had been almost completely recovered, the kingdom of Poland occupied, Courland, Lithuania, and Volhynia invaded. To the South they had crushed Serbia's opposition, saved Turkey, and won over Bulgaria. These triumphs, however, had not brought them peace, for the heart and soul of the Allies lay, after all, in the West—in England and France. The submarine campaign was counted on to keep England's hands tied; it remained, therefore, to attack and annihilate the French army. And so, in the autumn of 1915, preparations were begun on a huge scale for delivering a terrible blow in the West and dealing France the coup de grâce.

The determination with which the Germans followed out this plan and the reckless way in which they drew on their resources leave no doubt as to the importance the operation held for them. They staked everything on putting their adversaries out of the running by breaking through their lines, marching on Paris, and shattering the confidence of the French people. This much they themselves admitted. The German press, at the beginning of the battle, treated it as a matter of secondary import, whose object was to open up free communications between Metz and the troops in the Argonne; but the proportions of the combat soon gave the lie to such modest estimates, and in the excitement of the first days official utterances betrayed how great were the expectations.

Troops urged to take Verdun. Objects of the campaign.

On March 4 the Crown Prince urged his already over-taxed troops to make one supreme effort to "capture Verdun, the heart of France"; and General von Deimling announced to the 15th Army Corps that this would be the last battle of the war. At Berlin, travelers from neutral countries leaving for Paris by way of Switzerland were told that the Germans would get there first. The Kaiser himself, replying toward the end of February to the good wishes of his faithful province of Brandenburg, congratulated himself publicly on seeing his warriors of the 3d Army Corps about to carry "the most important stronghold of our principal enemy." It is plain, then, that the object was to take Verdun, win a decisive victory, and start a tremendous onslaught which would bring the war to a triumphant close....