Working With the Working Woman 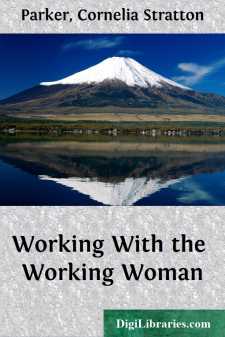 The number of books on the labor problem is indeed legion. The tragedy of the literature on any dynamic subject is that most of it is written by people who have time to do little else. Perhaps the best books on many subjects will never be written because those folk, who would be most competent to do the writing, through their vital connection with the problem at hand, never find the spare minutes to put their findings down on paper.

There could be no more dynamic subject than labor, since labor is nothing less than human beings, and what is more dynamic than human beings? It is, therefore, the last subject in the world to be approached academically. Yet most of the approach to the problems of labor is academic. Men in sanctuaries forever far removed from the endless hum and buzz and roar of machinery, with an intellectual background and individual ambitions forever far removed from the interests and desires of those who labor in factory and mill, theorize—and another volume is added to the study of labor.

But, points out some one, there are books on labor written by bona-fide workers. First, the number is few. Second, and more important, any bona-fide worker capable of writing any kind of book on any subject, puts himself so far above the rank and file that one is justified in asking, for how many does he speak?

Suppose that for the moment your main intellectual interest was to ascertain what the average worker—not the man or woman so far advanced in the cultural scale that he or she can set his ideas intelligently on paper—thought about his job and things in general. To what books could you turn? Indeed I have come to feel that in the pages of O. Henry there is more to be gleaned on the psychology of the working class than any books to be found on economic shelves. The outstanding conclusion forced upon any reader of such books as consciously attempt to give a picture of the worker and his job is that whoever wrote the books was bound and determined to find out everything that was wrong in every investigation made, and tell all about the wrongs and the wrongs only. Goodness knows, if one is hunting for the things which should be improved in this world, one life seems all too short to so much as make a start. In all honesty, then, such books on labor should be classified under “Troubles of Workers.” No one denies they are legion. Everybody's troubles are, if troubles are what you want to find.

The Schemer of Things has so arranged, praise be, that no one's life shall be nothing but woe and misery. Yea, even workers have been known to smile.

The experiences lived through in the following pages may strike the reader as superficial, artificial. In a way they were. Yet, they fulfilled their object in my eyes, at least. I wanted to feel for myself the general “atmosphere” of a job, several jobs. I wanted to know the worker without any suspicion on the part of the girls and women I labored among that they were being “investigated.” I wanted to see the world through their eyes—for the time being to close my own altogether.

There are no startling new facts or discoveries here recorded....