Woodrow Wilson and the World War A Chronicle of Our Own Times. 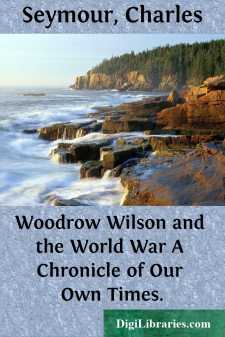 CHAPTER I WILSON THE EXECUTIVE

When, on March 4, 1913, Woodrow Wilson entered the White House, the first Democratic president elected in twenty years, no one could have guessed the importance of the rôle which he was destined to play. While business men and industrial leaders bewailed the mischance that had brought into power a man whose attitude towards vested interests was reputed none too friendly, they looked upon him as a temporary inconvenience. Nor did the increasingly large body of independent voters, disgusted by the "stand-pattism" of the Republican machine, regard Wilson much more seriously; rather did they place their confidence in a reinvigoration of the Grand Old Party through the progressive leadership of Roosevelt, whose enthusiasm and practical vision had attracted the approval of more than four million voters in the preceding election, despite his lack of an adequate political organization. Even those who supported Wilson most whole-heartedly believed that his work would lie entirely within the field of domestic reform; little did they imagine that he would play a part in world affairs larger than had fallen to any citizen of the United States since the birth of the country.

The new President was fifty-six years old. His background was primarily academic, a fact which, together with his Scotch-Irish ancestry, the Presbyterian tradition of his family, and his early years spent in the South, explains much in his character at the time when he entered upon the general political stage. After graduating from Princeton in 1879, where his career gave little indication of extraordinary promise, he studied law, and for a time his shingle hung out in Atlanta. He seemed unfitted by nature, however, for either pleasure or success in the practice of the law. Reserved and cold, except with his intimates, he was incapable of attracting clients in a profession and locality where ability to "mix" was a prime qualification. A certain lack of tolerance for the failings of his fellow mortals may have combined with his Presbyterian conscience to disgust him with the hard give-and-take of the struggling lawyer's life. He sought escape in graduate work in history and politics at Johns Hopkins, where, in 1886, he received his Ph.D. for a thesis entitled Congressional Government, a study remarkable for clear thinking and felicitous expression. These qualities characterized his work as a professor at Bryn Mawr and Wesleyan and paved his path to an appointment on the Princeton faculty in 1890, as Professor of Jurisprudence and Politics.

Despite his early distaste to the career of practicing lawyer, Wilson was by no means the man to bury himself in academic research. He lacked the scrupulous patience and the willingness to submerge his own personality which are characteristic of the scientific scholar. His gift was for generalization, and his writings were marked by clarity of thought and wealth of phrase, rather than by profundity. But such qualities brought him remarkable success as a lecturer and essayist, and constant practice gave him a fluency, a vocal control, and a power of verbal expression which assured distinction at the frequent public meetings and dinners where he was called upon to speak....