Wondrous Love and other Gospel addresses 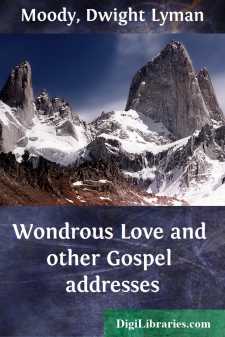 It is often recorded in Scripture that Jesus was moved by compassion; and we are told in this verse that after the disciples of John had come to Him and told Him that their master had been beheaded, that he had been put to a cruel death, He went out into a desert place, and the multitude followed Him, and that when He saw the multitude He had “compassion” on them, and healed their sick. If He were here to-night in person, standing in my place, His heart would be moved as He looked down into your faces, because He could also look into your hearts, and could read the burdens and troubles and sorrows you have to bear. They are hidden from my eye, but He knows all about them, and so when the multitude gathered round about Him, He knew how many weary, broken, and aching hearts there were there. But He is here to-night, although we cannot see Him with the bodily eye, and there is not a sorrow, or trouble, or affliction which any of you are enduring but He knows all about it; and He is the same to-night as He was when here upon earth—the same Jesus, the same Man of compassion.

When He saw that multitude He had compassion on it, and healed their sick; and I hope He will heal a great many sin-sick souls here, and will bind up a great many broken hearts. And let me say, in the opening of this sermon, that there is no heart so bruised and broken but the Son of God will have compassion upon you, if you will let Him. “He will not break a bruised reed, nor quench the smoking flax.” He came into the world to bring mercy, and joy, and compassion, and love.

If I were an artist I should like to draw some pictures to-night, and put before you that great multitude on which He had compassion. And then I would draw another painting of that man coming to Him full of leprosy, full of it from head to foot. There he was, banished from his home, banished from his friends, and he comes to Jesus with his sad and miserable story. And now, my friends, let us make

for that is what they are. Think of that man. Think how much he had suffered. I don’t know how many years he had been away from his wife and children and home; but there he was. He had put on a strange and particular garb, so that anybody coming near him might know that he was unclean. And when he saw any one approaching him he had to raise the warning cry, “Unclean! unclean! unclean!” Aye, and if the wife of his bosom were to come out to tell him that a beloved child was sick and dying, he durst not come near her, he was obliged to fly. He might hear her voice at a distance, but he could not be there to see his child in its last dying moments. He was, as it were, in a living sepulchre; it was worse than death. There he was, dying by inches, an outcast from everybody and everything, and not a hand put out to relieve him. Oh, what a terrible life! Then think of him coming to Christ, and when Christ saw him, it says He was moved with compassion. He had a heart that beat in sympathy with the poor leper, He had compassion on him, and the man came to Him and said, “Lord, if Thou wilt, Thou cant make me clean.” He knew there was no one to do it but the Son of God Himself, and

THE GREAT HEART OF CHRIST

was moved with compassion towards him. Hear the gracious words that fell from His lips—“I will; be thou clean!” and the leprosy fled, and the man was made whole immediately. Look at him now on his way back home to his wife and children and friends! No longer an outcast, no longer a loathsome thing, no longer cursed with that terrible leprous disease, but going back to his friends rejoicing. Now, my friends, you may say you pity a man who was so badly off, but did it ever strike you that you are a thousand times worse off? The leprosy of the soul is far worse than the leprosy of the body. I would rather a thousand times have the body full of leprosy than go down to hell with the soul full of sin. A good deal better that this right hand of mine were lopped off, that this right foot should decay, and that I should go halt and lame and blind all the days of my life, than be banished from God by the leprosy of sin....