Women of Modern France (Illustrated) Woman: In all ages and in all countries Vol. 7 (of 10) 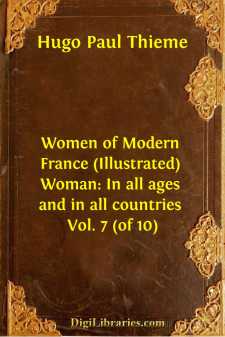 CHAPTER I WOMAN IN POLITICS

French women of the sixteenth, seventeenth, and eighteenth centuries, when studied according to the distinctive phases of their influence, are best divided into three classes: those queens who, as wives, represented virtue, education, and family life; the mistresses, who were instigators of political intrigue, immorality, and vice; and the authoresses and other educated women, who constituted themselves the patronesses of art and literature.

This division is not absolute by any means; for we see that in the sixteenth century the regent-mother (for example, Louise of Savoy and Catherine de' Medici), in extent of influence, fills the same position as does the mistress in the eighteenth century; though in the former period appears, in Diana of Poitiers, the first of a long line of ruling mistresses.

Queen-consorts, in the sixteenth as in the following centuries, exercised but little influence; they were, as a rule, gentle and obedient wives--even Catherine, domineering as she afterward showed herself to be, betraying no signs of that trait until she became regent.

The literary women and women of spirit and wit furthered all intellectual and social development; but it was the mistresses--those great women of political schemes and moral degeneracy--who were vested with the actual importance, and it must in justice to them be said that they not infrequently encouraged art, letters, and mental expansion.

Eight queens of France there were during the sixteenth century, and three of these may be accepted as types of purity, piety, and goodness: Claude, first wife of Francis I.; Elizabeth of France, wife of Charles IX.; and Louise de Vaudemont, wife of Henry III. These queens, held up to ridicule and scorn by the depraved followers of their husbands' mistresses, were reverenced by the people; we find striking contrasts to them in the two queens-regent, Louise of Savoy and Catherine de' Medici, who, in the period of their power, were as unscrupulous and brutal, intriguing and licentious, jealous and revengeful, as the most wanton mistresses who ever controlled a king. In this century, we find two other remarkable types: Marguerite d'Angoulême, the bright star of her time; and her whose name comes instantly to mind when we speak of the Lady of Angoulême--Marguerite de Navarre, representing both the good and the doubtful, the broadest sense of that untranslatable term femme d'esprit.

The first of the royal French women to whom modern woman owes a great and clearly defined debt was Anne of Brittany, wife of Louis XII. and the personification of all that is good and virtuous. To her belongs the honor of having taken the first step toward the social emancipation of French women; she was the first to give to woman an important place at court. This precedent she established by requesting her state officials and the foreign ambassadors to bring their wives and daughters when they paid their respects to her. To the ladies themselves, she sent a "royal command," bidding them leave their gloomy feudal abodes and repair to the court of their sovereign....