Women of Medi?val France Woman: in all ages and in all countries Vol. 5 (of 10) 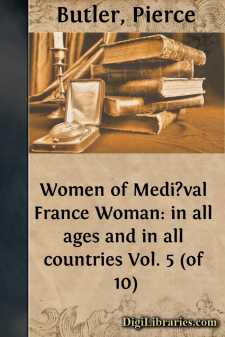 CHAPTER I IN THE DAYS OF THE CAPETIAN KINGS

In the older conception, history was a record chiefly of battles, of intrigues, of wicked deeds; it was true that the evil that men did lived after them; at least, the even tenor of their ways was passed over without notice by the chroniclers, and only a salient point, a great battle or a great crime, attracted attention. If little but deeds of violence is recorded about men, still less notice does the average mediaeval chronicler condescend to bestow upon women. History has been unjust to women, and this is preeminently the case in the history of France at the period with which we are to begin in this chapter. The age of the good King Robert was an age of warfare; the basic principle of feudalism was military service; and what position could women occupy in a social system dependent upon force? The general attitude toward women is hinted at by the very fact that, in the great war epic of Roland, the love story, upon which a modern poet would have laid much stress, is entirely subordinated; it is the hero and his marvellous valor that the poet keeps before us. The heroine, if she can be so called, the sister of Roland's brother in arms, Oliver, is not once named by the hero. In the midst of the battle, when Roland proposes to sound his horn to summon Charlemagne to his aid, Oliver reproaches him:

(By my beard! if I live to see my sister, the beautiful Aude, you shall never be her husband!) After this she is mentioned no more until Charlemagne returns to Aix with the sad news of Roland's heroic death. Then comes to him la belle Aude to ask where is her betrothed Roland. "Thou askest me for one who is dead," says Charlemagne; "but I will give thee a better man, my son and heir, Louis." "I understand thee not," replies Aude. "God forbid that I should survive Roland!" She falls fainting at the emperor's feet, and when he lifts her up he finds her dead. Then he calls four countesses, who bear the body into a convent and inter it, with great pomp, near the altar. (II. 3705-3731.) La belle Aude has fulfilled her mission when she dies for love of Roland. If she had been on the battlefield, she might have dressed Roland's wounds, since the rôle of physician and nurse was frequently played by women. Otherwise there is little use for women in an age of warfare, and so we shall find most of the good women passed over in silence, and only those of more masculine traits prominent in the earlier parts of our story.

Before we can begin the story of those women whose names have come down to us from the France of the year 1000, it is necessary to have some sort of understanding of the social, if not of the political, condition of France, to learn what sort of influences environed and moulded the lives of women in those days. Such a survey of society, indeed, will be useful for the whole period of the Middle Ages, and will serve as a background for the figures of the women we shall have to consider, whether they be saints or sinners....