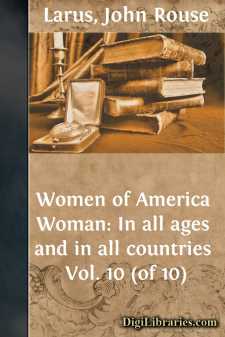 The present volume completes the story of woman as told in the series of which it forms part. The history of nations is, in its ultimate analysis, largely that of woman. Therefore this series in its wide inclusiveness forms a more than ordinarily interesting history. The present study of the women of America is innocent of theorizing or philosophy and from the nature of the subject the narrative takes the reader into paths generally unfamiliar in historic studies.

Of the North American aboriginal woman the knowledge possessed admits of but broad generalities as to her status and condition. The author of this volume has, however, happily extracted from the available sources what is informing as to the position of the woman so that a better conception of her will be the part of his readers. It will be seen that she has not always been the neglected and unconsidered creature that the popular mind has accepted. Instead, she has held among many tribes a higher place of power than man, and that by custom and in fact she was held in high consideration. The condition of the aboriginal woman before the advent of the white race was not that to which she fell as the consequence of that advent. In the present work notable instances in support of this view will be found. In considering the moral status and the customs of the aborigines it should be borne in mind that morality is standardized by nations or peoples for themselves, and the morality of individuals must be measured by its relation to convention to this respect. In this connection the author concludes that the morality of the Indian woman is of at least average excellence. That contact with the white man arrested--or as the author maintains "degraded"--the progress of civilization, slow as that progress may have been among the aborigines, cannot be doubted, nor that there was "a reversion to a more barbarous type than had before been prevalent."

As we consider the principles of government among the North American tribes we find that the matriarchal system prevailed. The Salic Law, whether in its general or its restricted meaning, was little favored among them. If in the history of these people a Queen Esther stands forth as a cruel monster, did not proud Rome produce a Messalina? Or need we go beyond the records of a later date of the people of one of the most cultured nations of Europe? And yet Esther was among the foes, the despoilers of her people, while Messalina found her victims among her own people. It may not be amiss to recall the incident of Frances Slocum as an evidence that the life of woman among the Indians was not necessarily distasteful. Altogether, the author of this volume writes sympathetically of the vanishing Amerinds,--which in no way lessens the value of his study,--and furnishes many little known or hardly remembered anecdotes of their women, while his succinct descriptions of their polity and of the lot and place of woman among them is both highly entertaining and instructive....