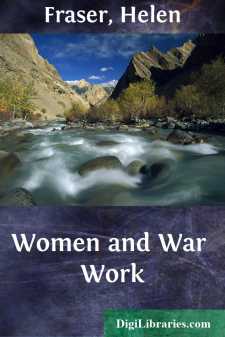 CHAPTER I THE SPIRIT OF WOMEN TO WOMEN

Your hearts are lifted up, your hearts

That have foreknown the utter price,

Of splendour and of sacrifice.

For you too, to battle go,

Not with the marching drums and cheers,

But in the watch of solitude

And through the boundless night of fears.

And not a shot comes blind with death,

And not a stab of steel is pressed

Home, but invisibly it tore,

And entered first a woman's breast.

From LAWRENCE BINYON's "For the Fallen."

The spirit of women in this greatest of world struggles cannot, in its essence, be differentiated from the spirit of men. They are one. The women of our countries in the mass feel about the issues of this struggle just as the men do; know, as they do, why we fight, and like them, are going on to the end. The declarations of our Government as to conditions for peace are ours, too, and when we vote, we shall show the spirit of women is clearly and definitely on the side of freedom, justice and democracy.

Our actions speak louder than any words can ever do, and the record of our women's sacrifices and work stand as great silent witnesses to our spirit. There is nothing we have been asked to do that we have not done and we have initiated great pieces of work ourselves. The hardest time was in the beginning when we waited for our tasks, feeling as if we beat stone walls, reading our casualty lists, receiving our wounded, caring for the refugees, doing everything we could for the sailor and soldier and his dependants, helping the women out of work, but feeling there was so much more to do behind the men—so very much more—for which we had to wait. We did all the other things faithfully and, so far as we could, prepared ourselves and when the tasks came, we volunteered in tens of thousands, every kind of woman, young, old, middle-aged, rich and poor, trained and untrained, and today we have 1,250,000 women in industry directly replacing men, 1,000,000 in munitions, 83,000 additional women in Government Departments, 258,300 whole and part-time women workers on the land. We are recruiting women for the Women's Army Auxiliary Corps at the rate of 10,000 a month and we have initiated a Women's Royal Naval Service. We have had the help of about 60,000 V.A.D.'s (Voluntary Aid Detachment of Red Cross) in Hospitals in England and France, and on our other fronts, in addition to our thousands of trained nurses.

The women in our homes carry on—no easy task in these days of shortages in food and coal and all the other difficulties, saving, conserving, working, caring for the children, with so many babies whose fathers have never seen them, though they are one to two years old, and so many babies who will never see their fathers.

Some of our women have died on active service, doctors, nurses and orderlies. Our most recent and greatest loss is in the death of Dr. Elsie Inglis, the initiator of the Scottish Women's Hospitals, who died on November 26th, three days after she had safely brought back her Unit from South Russia, which had been nursing the Serbians attached to the Russian army....