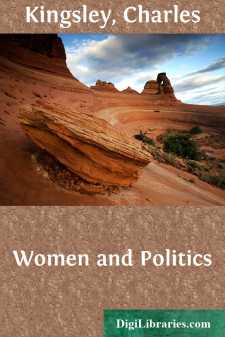 Somewhat more than 300 years ago, John Knox, who did more than any man to mould the thoughts of his nation—and indeed of our English Puritans likewise—was writing a little book on the ‘Regiment of Women,’ in which he proved woman, on account of her natural inferiority to man, unfit to rule.

And but the other day, Mr. John Stuart Mill, who has done more than any man to mould the thought of the rising generation of Englishmen, has written a little book, in the exactly opposite sense, on the ‘Subjection of Women,’ in which he proves woman, on account of her natural equality with man, to be fit to rule.

Truly ‘the whirligig of Time brings round its revenges.’  To this point the reason of civilised nations has come, or at least is coming fast, after some fifteen hundred years of unreason, and of a literature of unreason, which discoursed gravely and learnedly of nuns and witches, hysteria and madness, persecution and torture, and, like a madman in his dreams, built up by irrefragable logic a whole inverted pyramid of seeming truth upon a single false premiss.  To this it has come, after long centuries in which woman was regarded by celibate theologians as the ‘noxious animal,’ the temptress, the source of earthly misery, which derived—at least in one case—‘femina’ from ‘fe’ faith, and ‘minus’ less, because women had less faith than men; which represented them as of more violent and unbridled animal passions; which explained learnedly why they were more tempted than men to heresy and witchcraft, and more subject (those especially who had beautiful hair) to the attacks of demons; and, in a word, regarded them as a necessary evil, to be tolerated, despised, repressed, and if possible shut up in nunneries.

Of this literature of celibate unreason, those who have no time to read for themselves the pages of Sprenger, Meier, or Delrio the Jesuit, may find notices enough in Michelet, and in both Mr. Lecky’s excellent works.  They may find enough of it, and to spare also, in Burton’s ‘Anatomy of Melancholy.’  He, like Knox, and many another scholar of the 16th and of the first half of the 17th century, was unable to free his brain altogether from the idola specûs which haunted the cell of the bookworm.  The poor student, knowing nothing of women, save from books or from contact with the most debased, repeated, with the pruriency of a boy, the falsehoods about women which, armed with the authority of learned doctors, had grown reverend and incontestable with age; and even after the Reformation more than one witch-mania proved that the corrupt tree had vitality enough left to bring forth evil fruit.

But the axe had been laid to the root thereof.  The later witch prosecutions were not to be compared for extent and atrocity to the mediæval ones; and first, as it would seem, in France, and gradually in other European countries, the old contempt of women was being replaced by admiration and trust.  Such examples as that of Marguerite d’Angoulême did much, especially in the South of France, where science, as well as the Bible, was opening men’s eyes more and more to nature and to fact.  Good little Rondelet, or any of his pupils, would have as soon thought of burning a woman for a witch as they would have of immuring her in a nunnery....