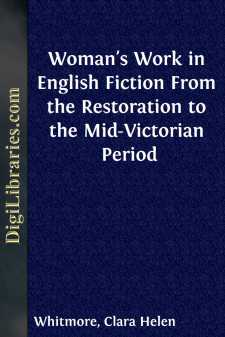 CHAPTER I The Duchess of Newcastle. Mrs. Behn. Mrs. Manley

In the many volumes containing the records of the past, the names of few women appear, and the number is still smaller of those who have won fame in art or literature. Sappho, however, has shown that poetic feeling and expression are not denied the sex; Jeanne d'Arc was chosen to free France; Mrs. Somerville excelled in mathematics; Maria Mitchell ranked among the great astronomers; Rosa Bonheur had the stroke of a master. These women possessed genius, and one is tempted to ask why more women have not left enduring work, especially in the realm of art. The Madonna and Child, what a subject for a woman's brush! Yet the joy of maternity which shines in a mother's eyes has seldom been expressed by her in words or on canvas. It was left for a man, William Blake, to write some of our sweetest songs of childhood.

But as soon as the novel appeared, a host of women writers sprang up. Women have always been story-tellers. Long before Homer sang of the fall of Troy, the Grecian matrons at their spinning related to their maids the story of Helen's infidelity; and, as they thought of their husbands and sons who had fallen for her sake, the story did not lack in fervour. But the minstrels have always had this advantage over the story-tellers: their words, sung to the lyre, were crystallised in rhythmic form, so that they resisted the action of time, while only the substance of the stories, not the words which gave them beauty and power, could be retained, and consequently they crumbled away. When the novel took on literary form, women began to write. They were not imitators of men, but opened up new paths of fiction, in many of which they excelled.

The first woman to essay prose fiction as an art was Margaret, Queen of Navarre. In the seventy-two tales of The Heptameron, a book written before the dawn of realism, she related many anecdotes of her brother, Francis the First, and his courtiers. Woman's permanent influence over the novel began about 1640, and was due directly to the Hotel Rambouillet, in whose grand salon there mingled freely for half a century the noblest minds of France. This salon was presided over by the Marquise de Rambouillet, who had left the licentious court of Henry the Fourth, and had formed here in her home between the Louvre and the Tuileries a little academy, where Corneille read his tragedies before they were published, and Bousset preached his first sermon, while among the listeners were the beautiful Duchess de Longueville, Madame de Lafayette, Madame de Sevigne and Mademoiselle de Scuderi, besides other persons of royal birth or of genius. The ladies of this salon became the censors of the manners, the literature, and even the language of France. Here was the first group of women writers whose fame extended beyond their own country, and has lasted, though somewhat dimmed, to the present. Since the seventeenth century the influence of women novelists has been ever widening.

In England, women entered the domain of literature later than in France, Spain, or Italy....