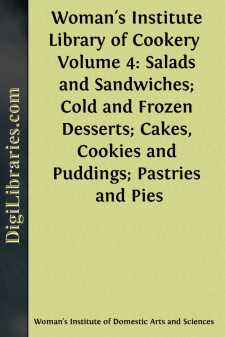 SALADS AND SANDWICHES SALADS IN THE DIET

1. So much variety exists among salads that it is somewhat difficult to give a comprehensive definition of this class of foods. In general, however, salads may be considered as a dish of green herbs or vegetables, sometimes cooked, and usually chopped or sliced, sometimes mixed with fruit or with cooked and chopped cold meat, fish, etc., and generally served with a dressing. For the most part, salads take their name from their chief ingredient, as, for instance, chicken salad, tomato salad, pineapple salad, etc. Just what place salads have in the meal depends on the salad itself. A high-protein salad, such as lobster salad, should take the place of the meat course, whereas, a light salad of vegetables or fruits may be used as an additional course.

2. IMPORTANCE OF SALADS.--Salads are often considered to be a dish of little importance; that is, something that may be left out or added to a meal without affecting it to any great extent. While this may be the case in a meal that is composed of a sufficient variety of foods, salads have a definite place in meals as they are planned in the majority of households. Often there is a tendency to limit green vegetables or fresh fruits in the diet, but if the members of a family are to be fed an ideal diet it is extremely important that some of these foods enter into each day's meals, a fact that is often overlooked. There is no more effective nor appetizing way in which to include them in a meal than in the serving of salads. In addition, salads make a strong appeal to the appetite and at the same time are beneficial so far as the health of the family is concerned.

3. PURPOSES OF SALADS.--Because of the wide variety of salads and the large number of ingredients from which a selection may be made in their preparation, salads can be used for various purposes. The housewife who gives much attention to the artistic side of the serving of food in her home will often use a salad to carry out a color scheme in her meal. This is, of course, the least valuable use that salads have, but it is a point that should not be overlooked. The chief purpose of salads in a meal is to provide something that the rest of the foods served in the meal lack.

Even though it is not desired to use the salad to carry out a color scheme, it should always be made an attractive dish. As is well known, nothing is so unappetizing as a salad in which the ingredients have not been properly prepared, the garnish is not fresh and crisp, or the dressing and salad ingredients have been combined in such a way as to appear messy or stale looking. There is no excuse for such conditions, and they need not exist if proper attention is given to the preparation of the salad.

4. SELECTION OF SALADS.--Although salads, through their variety, offer the housewife an opportunity to vary her meals, they require a little attention as to their selection if a properly balanced meal is to be the result. Salads that are high in food value or contain ingredients similar to those found in the other dishes served in the meal, should be avoided with dinners or with other heavy meals....