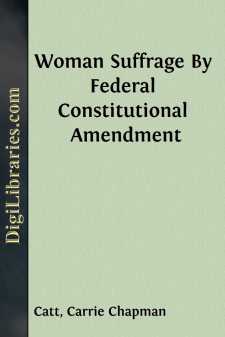 CHAPTER I WHY THE FEDERAL AMENDMENT?

Woman Suffrage is coming—no intelligent person in the United States or in the world will deny that fact. The most an intelligent opponent expects to accomplish is to postpone its establishment as long as possible. When it will come and how it will come are still open questions. Woman Suffrage by Federal Amendment is supported by seven main reasons. These main reasons are evaded or avoided; they are not answered.

1. KEEPING PACE WITH OTHER COUNTRIES DEMANDS IT.

Suffrage for men and suffrage for women in other lands, with few and minor exceptions, has been granted by parliamentary act and not by referenda. By such enactment the women of Australia were granted full suffrage in Federal elections by the Federal Parliament (1902), and each State or Province granted full suffrage in all other elections by act of their Provincial Parliaments.[A] By such enactment the Isle of Man, New Zealand, Finland, Norway, Iceland and Denmark gave equal suffrage in all elections to women.[A] By such process the Parliaments of Manitoba, Saskatchewan and Alberta gave full provincial suffrage to their women in 1916. British Columbia referred the question to the voters in 1916, but the Provincial Parliament had already extended all suffrage rights except the parliamentary vote, and both political parties lent their aid in the referendum which consequently gave a majority in every precinct on the home vote and a majority of the soldier vote was returned from Europe later. By parliamentary act all other Canadian Provinces, the Provinces of South Africa, the countries of Sweden[A] and Great Britain have extended far more voting privileges than any woman citizen of the United States east of the Missouri River (except those of Illinois) has received. To the women of Belise (British Honduras), the cities of Rangoon (Burmah), Bombay (India), the Province of Baroda (India), the Province of Voralberg (Austria), and Laibach (Austria) the same statement applies. In Bohemia, Russia and various Provinces of Austria and Germany, the principle of representation is recognized by the grant to property-holding women of a vote by proxy. The suffragists of France reported just before the war broke out that the French Parliament was pledged to extend universal municipal suffrage to women. Men and women of high repute say the full suffrage is certain to be extended by the British Parliament to the women of England, Scotland, Ireland and Wales soon after the close of the war and already these women have all suffrage rights except the vote for Parliamentary members. These facts are strange since it was the United States which first established general suffrage for men upon the two principles that "taxation without representation is tyranny" and that governments to be just should "derive their consent from the governed." The unanswerable logic of these two principles is responsible for the extension of suffrage to men and women the world over. In the United States, however, women are still taxed without "representation" and still live under a government to which they have given no "consent." IT IS OBVIOUSLY UNFAIR TO SUBJECT WOMEN OF THIS COUNTRY—WHICH BOASTS THAT IT IS THE LEADER IN THE MOVEMENT TOWARD UNIVERSAL SUFFRAGE—TO A LONGER, HARDER, MORE DIFFICULT PROCESS THAN HAS BEEN IMPOSED BY OTHER NATIONS UPON MEN OR WOMEN....