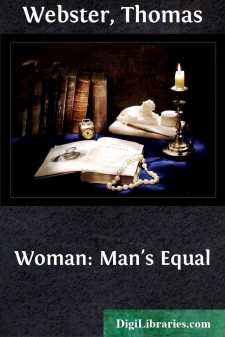 In the discussion of the question of woman's equality with man, I purpose to prove from the Bible, as I believe I can, that at the creation there was neither superiority nor inferiority ordained between Adam and Eve; and that the partial distinctions which have for ages existed, and which still exist, are of man's invention; and may, therefore with propriety, be examined, and, where found unfair or oppressive, may be justly condemned.

I hope also to be able to establish the fact, from history, that in every age, whenever an opportunity has afforded itself, women have proved themselves to be fully men's equals in intellectual capacity, in morality, industry, and religion; and that, in matters of government, they have proved themselves to be as wise and judicious rulers as any of the opposite sex, under the same, or similar, circumstances. That the instances in which women have been called to places of power and responsibility in the State are comparatively rare, is not to be attributed to natural incapacity or mental inferiority, but to the fact of the persistent efforts made by men to keep them as much as possible in the background; that in many instances women have broken the fetters of oppression and prejudice by which they were bound, and have ascended the hill of fame in advance of their male opponents. If, then, women have in other and darker ages over-leaped the formidable barriers placed in their way, and thus benefited their respective nations, and sometimes the world, by their intrepidity, why should obstructions be placed in their path now, in this day of professed light and progress? Freedom, improvement, and righteousness ought to be the watchwords of the nations.

After enduring years of ridicule and contempt, the advocates of women's rights begin to see some slight indications that their labors have not been altogether futile. Both in England and America the movement is now making considerable progress. Persons of wealth, of high position in the social scale, and of sound education, have become its warm friends and advocates; but, so hard is it to remove old-time prejudice, it is probable that many years may yet elapse before women will be allowed to enjoy equal rights and privileges with men.

All great reforms, whether European or American, are of slow growth, and are usually denounced as running counter to Scripture and common sense; as witness the discussions on the disestablishment of the Irish Church in Britain, and on the abolition of slavery in the United States; both of which reforms were fiercely assailed as contrary to the Word of God and reason, and declared to be in fact the offspring of infidelity. But, like these two great reforms, when movements of vital importance are once inaugurated, their arriving at perfection is but a matter of time. Right is almost always sure to prevail in the end.

The claiming for women equality with men, not only in mental capacity, but in civil and ecclesiastical rights, may shock the preconceived opinions of many persons, and will probably subject the individual advancing such views to the charge of fanaticism and false teaching; yet we conceive the claim to be consistent with reason, justice, and the Word of God; and its full recognition to be of vital importance to the entire race of mankind....