Woman in the Ninteenth Century and Kindred Papers Relating to the Sphere, Condition and Duties, of Woman. 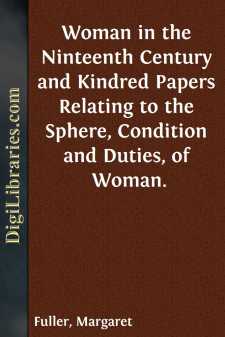 It has been thought desirable that such papers of Margaret Fuller Ossoli as pertained to the condition, sphere and duties of Woman, should be collected and published together. The present volume contains, not only her "Woman in the Nineteenth Century,"—which has been before published, but for some years out of print, and inaccessible to readers who have sought it,—but also several other papers, which have appeared at various times in the Tribune and elsewhere, and yet more which have never till now been published.

My free access to her private manuscripts has given to me many papers, relating to Woman, never intended for publication, which yet seem needful to this volume, in order to present a complete and harmonious view of her thoughts on this important theme. I have preferred to publish them without alteration, as most just to her views and to the reader; though, doubtless, she would have varied their expression and form before giving them to the press.

It seems right here to remark, In order to avoid any misapprehension, that Margaret Ossoli's thoughts wore not directed so exclusively to the subject of the present volume as have been the minds of some others. As to the movement for the emancipation of Woman from the unjust burdens and disabilities to which she has been subject oven in our own land, my sister could neither remain indifferent nor silent; yet she preferred, as in respect to every other reform, to act independently and to speak independently from her own stand-point, and never to merge her individuality in any existing organization. This she did, not as condemning such organizations, nor yet as judging them wholly unwise or uncalled for, but because she believed she could herself accomplish more for their true and high objects, unfettered by such organizations, than if a member of them. The opinions avowed throughout this volume, and wherever expressed, will, then, be found, whether consonant with the reader's or no, in all cases honestly and heartily her own,—the result of her own thought and faith. She never speaks, never did speak, for any clique or sect, but as her individual judgment, her reason and conscience, her observation and experience, taught her to speak.

I could have wished that some one other than a brother should have spoken a few fitting words of Margaret Fuller, as a woman, to form a brief but proper accompaniment to this volume, which may reach some who have never read her "Memoirs," recently published, or have never known her in personal life. This seemed the more desirable, because the strictest verity in speaking of her must seem, to such as knew her not, to be eulogy. But, after several disappointments as to the editorship of the volume, the duty, at last, has seemed to devolve upon me; and I have no reason to shrink from it but a sense of inadequacy.

It is often supposed that literary women, and those who are active and earnest in promoting great intellectual, philanthropic, or religious movements, must of necessity neglect the domestic concerns of life....