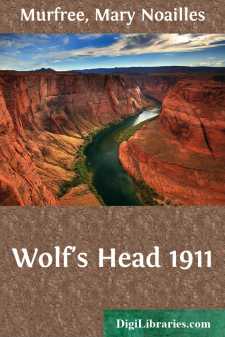 It might well be called the country of the outlaw, this vast tract of dense mountain forests and craggy ravines, this congeries of swirling torrents and cataracts and rapids. Here wild beasts lurked out their savage lives, subsisting by fang and prey,—the panther, the bear, the catamount, the wolf,—and like unto them, ferocious and fugitive, both fearsome and afraid, the man with a "wolf's head," on which was set a price, even as the State's bounty for the scalps of the ravening brutes.

One gloomy October afternoon, the zest of a group of sportsmen, who had pitched their camp in this sequestered wilderness, suffered an abatement on the discovery of the repute of the region and the possibility of being summoned to serve on a sheriff's posse in the discharge of the grimmest of duties.

"But he is no outlaw in the proper sense of the term. The phrase has survived, but the fact is obsolete," said Seymour, who was both a prig and a purist, a man of leisure, and bookish, but a good shot, and vain of his sylvan accomplishments. "Our law places no man beyond the pale of its protection. He has a constitutional right to plead his case in court."

"What is the reward offered to hale him forth and force him to enjoy that privilege—five hundred dollars?" asked Bygrave, who was a newspaper man and had a habit of easy satire.

"Of course he would never suffer himself to be taken alive." Purcell's vocation was that of a broker, and he was given to the discrimination of chances and relative values. "Therefore he is as definitely caput lupinum as any outlaw of old. Nobody would be held accountable for cracking his 'wolf's head' off, in the effort to arrest him for the sake of the five hundred dollars. But, meantime, how does the fellow contrive to live!"

"Jes by his rifle, I reckon," replied the rural gossip whom intrusive curiosity occasionally lured to their camp-fire. "Though sence that thar big reward hev been n'ised abroad, I'd think he'd be plumb afraid ter fire a shot. The echoes be mighty peart these dumb, damp fall days."

The old jeans-clad mountaineer had a certain keen spryness of aspect, despite his bent knees and stooped shoulders. His deeply grooved, narrow, thin face was yet more elongated by the extension of a high forehead into a bald crown, for he wore his broad wool hat on the back of his head. There was something in his countenance not dissimilar to the facial contour of a grasshopper, and the suggestion was heightened by his persistent, rasping chirp.

"That's what frets Meddy; she can't abide the idee of huntin' a human with sech special coursers ez money reward. She 'lows it mought tempt a' evil man or a' ignorant one ter swear a miser'ble wretch's life away. Let the law strengthen its own hands—that's what Meddy say. Don't kindle the sperit of Cain in every brother's breast. Oh, Meddy is plumb comical whenst she fairly gits ter goin', though it's all on account of that thar man what war growed up in a tree."

The dryadic suggestions of a dendroidal captivity flashed into Seymour's mind with the phrase, and stimulated his curiosity as to some quaint rural perversion of the legend.

But it was grim fact that the old mountaineer detailed in answer to the question, as he sat on a log by the fire, while the sportsmen lay on the ground about it and idly listened.

"One day—'t war 'bout two year' ago—thar war a valley-man up hyar a-huntin' in the mountings with some other fellers, an' toward sunset he war a-waitin' at a stand on a deer-path up thar nigh Headlong Creek, hopin' ter git a shot whenst the deer went down to drink....