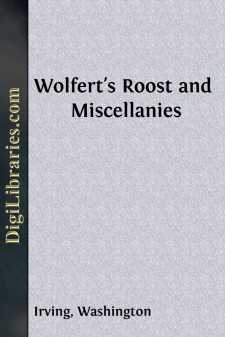 Sir: I have observed that as a man advances in life, he is subject to a kind of plethora of the mind, doubtless occasioned by the vast accumulation of wisdom and experience upon the brain. Hence he is apt to become narrative and admonitory, that is to say, fond of telling long stories, and of doling out advice, to the small profit and great annoyance of his friends. As I have a great horror of becoming the oracle, or, more technically speaking, the "bore," of the domestic circle, and would much rather bestow my wisdom and tediousness upon the world at large, I have always sought to ease off this surcharge of the intellect by means of my pen, and hence have inflicted divers gossiping volumes upon the patience of the public. I am tired, however, of writing volumes; they do not afford exactly the relief I require; there is too much preparation, arrangement, and parade, in this set form of coming before the public. I am growing too indolent and unambitious for any thing that requires labor or display. I have thought, therefore, of securing to myself a snug corner in some periodical work where I might, as it were, loll at my ease in my elbow-chair, and chat sociably with the public, as with an old friend, on any chance subject that might pop into my brain.

In looking around, for this purpose, upon the various excellent periodicals with which our country abounds, my eye was struck by the title of your work—"THE KNICKERBOCKER." My heart leaped at the sight. DIEDRICH KNICKERBOCKER, Sir, was one of my earliest and most valued friends, and the recollection of him is associated with some of the pleasantest scenes of my youthful days. To explain this, and to show how I came into possession of sundry of his posthumous works, which I have from time to time given to the world, permit me to relate a few particulars of our early intercourse. I give them with the more confidence, as I know the interest you take in that departed worthy, whose name and effigy are stamped upon your title-page, and as they will be found important to the better understanding and relishing divers communications I may have to make to you.

My first acquaintance with that great and good man, for such I may venture to call him, now that the lapse of some thirty years has shrouded his name with venerable antiquity, and the popular voice has elevated him to the rank of the classic historians of yore, my first acquaintance with him was formed on the banks of the Hudson, not far from the wizard region of Sleepy Hollow. He had come there in the course of his researches among the Dutch neighborhoods for materials for his immortal history. For this purpose, he was ransacking the archives of one of the most ancient and historical mansions in the country. It was a lowly edifice, built in the time of the Dutch dynasty, and stood on a green bank, overshadowed by trees, from which it peeped forth upon the Great Tappan Zee, so famous among early Dutch navigators. A bright pure spring welled up at the foot of the green bank; a wild brook came babbling down a neighboring ravine, and threw itself into a little woody cove, in front of the mansion. It was indeed as quiet and sheltered a nook as the heart of man could require, in which to take refuge from the cares and troubles of the world; and as such, it had been chosen in old times, by Wolfert Acker, one of the privy councillors of the renowned Peter Stuyvesant.

This worthy but ill-starred man had led a weary and worried life, throughout the stormy reign of the chivalric Peter, being one of those unlucky wights with whom the world is ever at variance, and who are kept in a continual fume and fret, by the wickedness of mankind. At the time of the subjugation of the province by the English, he retired hither in high dudgeon; with the bitter determination to bury himself from the world, and live here in peace and quietness for the remainder of his days. In token of this fixed resolution, he inscribed over his door the favorite Dutch motto, "Lust in Rust," (pleasure in repose.) The mansion was thence called "Wolfert's Rust"—Wolfert's Rest; but in process of time, the name was vitiated into Wolfert's Roost, probably from its quaint cock-loft look, or from its having a weather-cock perched on every gable....