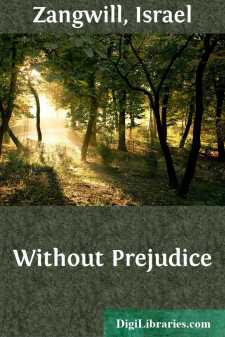 A VISION OF THE BURDEN OF MAN

And it came to pass that my soul was vexed with the problems of life, so that I could not sleep. So I opened a book by a lady novelist, and fell to reading therein. And of a sudden I looked up, and lo! a great host of women filled the chamber, which had become as the Albert Hall for magnitude—women of all complexions, countries, times, ages, and sexes. Some were bewitching and beautiful, some wan and flat-breasted, some elegant and stately, some ugly and squat, some plain and whitewashed, and some painted and decorated; women in silk gowns, and women in divided skirts, and women in widows' weeds, and women in knickerbockers, and women in ulsters, and women in furs, and women in crinolines, and women in tights, and women in rags; but every woman of them all in tears. The great chamber was full of a mighty babel; shouts and ululations, groans and moans, weeping and wailing and gnashing of false and genuine teeth, and tearing of hair both artificial and natural; and therewith the flutter of a myriad fans, and the rustle of a million powder-puffs. And the air reeked with a thousand indescribable scents—patchouli and attar of roses and cherry blossom, and the heavy odours of hair-oil and dyes and cosmetics and patent medicines innumerable.

Now when the women perceived me on my reading-chair in their midst, the shrill babel swelled to a savage thunder of menace, so that I deemed they were wroth with me for intruding upon them in mine own house; but as mine ear grew accustomed to the babel of tongues, I became aware of the true import of their ejaculations.

"O son of man!" they cried, in various voices: "thy cruel reign is over, thy long tyranny is done; thou hast glutted thyself with victims, thou hast got drunken on our hearts' blood, we have made sport for thee in our blindness. But the Light is come at last, the slow night has budded into the rose of dawn, the masculine monster is in his death-throes, the kingdom of justice is at hand, the Doll's House has been condemned by the sanitary inspector."

I strove to deprecate their wrath, but my voice was as the twitter of a sparrow in a hurricane. At length I ruffled my long hair to a leonine mane, and seated myself at the piano. And lo! straightway there fell a deep silence—you could have heard a hairpin drop.

"What would you have me do, O daughters of Eve?" I cried. "What is my sin? what my iniquity?" Then the clamour recommenced with tenfold violence, disappointment at the loss of a free performance augmenting their anger.

"Give me a husband," shrieked one.

"Give me a profession," shrieked another.

"Give me a divorce," shrieked a third.

"Give me free union," shrieked a fourth.

"Give me an income," shrieked a fifth.

"Give me my deceased sister's husband," shrieked a sixth.

"Give me my divorced husband's children," shrieked a seventh.

"Give me the right to paint from the nude in the Academy schools," shrieked an eighth.

"Give me an Oxford degree," shrieked a ninth.