With Wolfe in Canada The Winning of a Continent 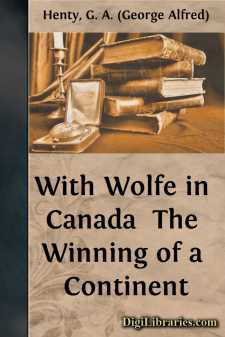 Most of the towns standing on our seacoast have suffered a radical change in the course of the last century. Railways, and the fashion of summer holiday making, have transformed them altogether, and great towns have sprung up where fishing villages once stood. There are a few places, however, which seem to have been passed by, by the crowd. The number yearly becomes smaller, as the iron roads throw out fresh branches. With the advent of these comes the speculative builder. Rows of terraces and shops are run up, promenades are made, bathing machines and brass bands become familiar objects, and in a few years the original character of the place altogether disappears.

Sidmouth, for a long time, was passed by, by the world of holiday makers. East and west of her, great changes took place, and many far smaller villages became fashionable seaside watering places. The railway, which passed by some twelve miles away, carried its tens of thousands westward, but left few of them for Sidmouth, and anyone who visited the pretty little place, fifteen years back, would have seen it almost as it stood when our story opens a century ago.

There are few places in England with a fairer site. It lies embosomed in the hills, which rise sharply on either side of it, while behind stretches a rich, undulating country, thickly dotted with orchards and snug homesteads, with lanes bright with wildflowers and ferns, with high hedges and trees meeting overhead. The cold breezes, which render so bare of interest the walks round the great majority of our seaside towns, pass harmlessly over the valley of the Sid, where the vegetation is as bright and luxuriant as if the ocean lay leagues away, instead of breaking on the shore within a few feet of the front line of houses.

The cliffs which, on either side, rise from the water's edge, are neither white like those to the east, nor grey as are the rugged bulwarks to the west. They are of a deep red, warm and pleasant to the eye, with clumps of green showing brightly up against them on every little ledge where vegetation can get a footing; while the beach is neither pebble, nor rock, nor sand, but a smooth, level surface sloping evenly down; hard and pleasant to walk on when the sea has gone down, and the sun has dried and baked it for an hour or two; but slippery and treacherous when freshly wetted, for the red cliffs are of clay. Those who sail past in a boat would hardly believe that this is so, for the sun has baked its face, and the wind dried it, till it is cracked and seamed, and makes a brave imitation of red granite; but the clammy ooze, when the sea goes down, tells its nature only too plainly, and Sidmouth will never be a popular watering place for children, for there is no digging sand castles here, and a fall will stain light dresses and pinafores a ruddy hue, and the young labourers will look as if they had been at work in a brick field.

But a century since, the march of improvement had nowhere begun; and there were few larger, and no prettier, seaside villages on the coast than Sidmouth....