With Those Who Wait 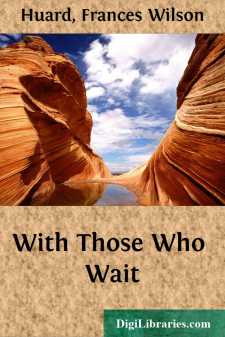 WITH THOSE WHO WAIT I

Once upon a time there wasn't any war. In those days it was my custom to drive over to Château-Thierry every Friday afternoon. The horses, needing no guidance, would always pull up at the same spot in front of the station from which point of vantage, between a lilac bush and the switch house, I would watch for the approaching express that was to bring down our week-end guests.

A halt at the bridge head would permit our friends to obtain a bird's-eye view of the city, while I purchased a measure of fresh-caught, shiny-scaled river fish, only to be had of the old boatman after the arrival of the Paris train. Invariably there were packages to be called for at Berjot's grocery store, or Dudrumet's dry goods counter, and then H. having discovered the exact corner from which Corot painted his delightful panorama of the city, a pilgrimage to the spot almost always ensued.

A glance in passing at Jean de la Fontaine's house, a final stop at "The Elephant" on the quay to get the evening papers, and then passing through Essommes with its delightful old church, Bonneil and Romery, our joyful party would reach Villiers just in time for dinner.

A certain mystery shrouded the locality where our home was situated. Normandy, Brittany, the Châteaux of Touraine, the climate of the Riviera, have, at various seasons been more attractive, not only to foreigners, but to the Parisians themselves, so aside from the art lovers who made special trips to Rheims, there was comparatively little pleasure travelling in our immediate neighbourhood, and yet what particular portion of France is more historically renowned? Is it not on those same fertile fields so newly consecrated with our blood that every struggle for world supremacy has been fought?

It would be difficult to explain just why this neglect of the lovely East; neglect which afforded us the privilege of guiding our friends, not only along celebrated highways, but through leafy by-paths that breathed the very poetry of the XVIIth. century, and stretched, practically untrodden, through Lucy-le-Bocage, Montreuil-aux-Lions, down to the Marne and La Ferté-sous-Jouarre.

It was wonderful rolling country that rippled back from the river; abounding not only in vegetation, but in silvery green harmonies so beloved of the Barbizon master, and sympathetic even by the names of the tiny hamlets which dotted its vine-covered hills.

Our nearest dealer in agricultural machines lived in a place called Gaudelu. We called him "MacCormick" because of his absolute and loquacious partiality for those American machines, and to reach his establishment we used to pass through delightful places called le Grand Cormont, Neuilly-la-Poterie, Villers-le-Vaste.

As I write these lines (July, 1918) the station at Château-Thierry is all of that city that remains in our hands. The bridge head has become the most disputed spot on the map of Europe; "The Elephant" a heap of waste in No Man's Land, while doubtless from the very place where Corot painted his masterpiece, a German machine gun dominating the city is belching forth its ghastly rain of steel....