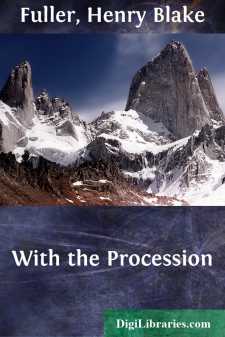 When old Mr. Marshall finally took to his bed, the household viewed this action with more surprise than sympathy, and with more impatience than surprise. It seemed like the breaking down of a machine whose trustworthiness had been hitherto infallible; his family were almost forced to the acknowledgement that he was but a mere human being after all. They had enjoyed a certain intimacy with him, in lengths varying with their respective ages, but they had never made a full avowal that his being rested on any tangible physical basis. Rather had they fallen into the way of considering him as a disembodied intelligence, whose sole function was to direct the transmutation of values and credits and resources and opportunities into the creature comforts demanded by the state of life unto which it had please Providence to call them; and their dismay was now such as might occur at the Mint if the great stamp were suddenly and of its own accord to cease its coinage of double-eagles and to sink into a silence of supine idleness. His wife and children acknowledged, indeed, his head and his hands—those it were impossible to overlook; but his head stopped with the rim of his collar, while his hands—those long, lean hands, freckled, tufted goldishly between joints and knuckles—they never followed beyond the plain gilt sleeve-buttons (marked with a Roman M) which secured the overlapping of his cuffs. No, poor old David Marshall was like one of the early Tuscan archangels, whose scattered members are connected by draperies merely, with no acknowledged organism within; nor were his shining qualities fully recognized until the resolutions passed by the Association of Wholesale Grocers reached the hands of his bereaved—-

But this is no way to begin.

The grimy lattice-work of the drawbridge swung to slowly, the steam-tug blackened the dull air and roiled the turbid water as it dragged its schooner on towards the lumber-yards of the South Branch, and a long line of waiting vehicles took up their interrupted course through the smoke and the stench as they filed across the stream into the thick of business beyond: first a yellow street-car; then a robust truck laden with rattling sheet-iron, or piled high with fresh wooden pails and willow baskets; then a junk-cart bearing a pair of dwarfed and bearded Poles, who bumped in unison with the jars of its clattering springs; then, perhaps, a bespattered buggy, with reins jerked by a pair of sinewy and impatient hands. Then more street-cars; then a butcher's cart loaded with the carcasses of calves—red, black, piebald—or an express wagon with a yellow cur yelping from its rear; then, it may be, an insolently venturesome landau, with crested panel and top-booted coachman. Then drays and omnibuses and more street-cars; then, presently, somewhere in the line, between the tail end of one truck and the menacing tongue of another, a family carry-all—a carry-all loaded with its family, driven by a man of all work, drawn by a slight and amiable old mare, and encumbered with luggage which shows the labels of half the hotels of Europe....