With The Night Mail A Story of 2000 A.D. (Together with extracts from the comtemporary magazine in which it appeared) 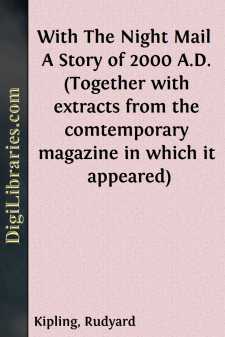 With the Night Mail

At nine o'clock of a gusty winter night I stood on the lower stages of one of the G. P. O. outward mail towers. My purpose was a run to Quebec in "Postal Packet 162 or such other as may be appointed"; and the Postmaster-General himself countersigned the order. This talisman opened all doors, even those in the despatching-caisson at the foot of the tower, where they were delivering the sorted Continental mail. The bags lay packed close as herrings in the long gray under-bodies which our G. P. O. still calls "coaches." Five such coaches were filled as I watched, and were shot up the guides to be locked on to their waiting packets three hundred feet nearer the stars.

From the despatching-caisson I was conducted by a courteous and wonderfully learned official—Mr. L. L. Geary, Second Despatcher of the Western Route—to the Captains' Room (this wakes an echo of old romance), where the mail captains come on for their turn of duty. He introduces me to the Captain of "162"—Captain Purnall, and his relief, Captain Hodgson. The one is small and dark; the other large and red; but each has the brooding sheathed glance characteristic of eagles and aëronauts. You can see it in the pictures of our racing professionals, from L. V. Rautsch to little Ada Warrleigh—that fathomless abstraction of eyes habitually turned through naked space.

On the notice-board in the Captains' Room, the pulsing arrows of some twenty indicators register, degree by geographical degree, the progress of as many homeward-bound packets. The word "Cape" rises across the face of a dial; a gong strikes: the South African mid-weekly mail is in at the Highgate Receiving Towers. That is all. It reminds one comically of the traitorous little bell which in pigeon-fanciers' lofts notifies the return of a homer.

"Time for us to be on the move," says Captain Purnall, and we are shot up by the passenger-lift to the top of the despatch-towers. "Our coach will lock on when it is filled and the clerks are aboard."...

"No. 162" waits for us in Slip E of the topmost stage. The great curve of her back shines frostily under the lights, and some minute alteration of trim makes her rock a little in her holding-down slips.

Captain Purnall frowns and dives inside. Hissing softly, "162" comes to rest as level as a rule. From her North Atlantic Winter nose-cap (worn bright as diamond with boring through uncounted leagues of hail, snow, and ice) to the inset of her three built-out propeller-shafts is some two hundred and forty feet. Her extreme diameter, carried well forward, is thirty-seven. Contrast this with the nine hundred by ninety-five of any crack liner and you will realize the power that must drive a hull through all weathers at more than the emergency-speed of the "Cyclonic"!

The eye detects no joint in her skin plating save the sweeping hair-crack of the bow-rudder—Magniac's rudder that assured us the dominion of the unstable air and left its inventor penniless and half-blind. It is calculated to Castelli's "gull-wing" curve....