With The Immortal Seventh Division 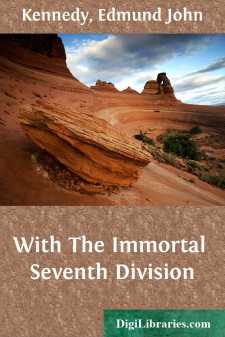 'A telegram, sir!' and a mounted orderly who had ridden over from Larkhill, stood outside my tent at the Bustard's Camp, Salisbury Plain, at 5 a.m., on September 17, 1914.

In that remote part of the world so removed from the benefits of ordinary life, we were yet in receipt of our daily papers at that early hour in the morning, and I was enjoying a twenty-four hours' history of the world, at the moderate price of a penny, when the brief tones of the orderly aroused me from its perusal. Its contents were startling: 'You have been selected for immediate foreign service. Report yourself early to-morrow morning at the War Office.' For some days past I had been doing duty with my Territorial Battalion, the 7th Hants; but daily I had been hoping that I might be able to throw in my lot with the great mass of men, who had volunteered at the call of King and country.

During the month of August I had been shut up at the Riffel Alp with some seventy other unfortunates; kicking our heels in enforced ignorance when we would fain have been near the centre of information, if not of service. Unable to travel owing to the railways of Switzerland and France being required for the mobilization of troops, we could only possess our souls in patience. It was a time never to be forgotten, for although our English blood was stirred by the rumours that reached us of an expeditionary force being landed in France, under General Sir John French, and of even greater significance, the mobilization of the English Fleet, yet our only source of information was derived from the Corriere della Sera, the communiqués of which were supplied by the Wolff Agency. Our state of mind can be readily imagined when I mention such points of reliable news as the 'Destruction of the English Fleet; Death of Sir John French; Invasion of England; London taken; Bank of England in flames.' Of course we knew that this was false, and yet there was no possibility of rebutting the statements.

For nearly a month we alternated between hope and fear. The effect of the bright Swiss sunshine would at times render us optimistic, and then the fall of night would once more see us plunged into the depths of a helpless pessimism. However, the time came when the little English colony struggled through the difficulties of railway transport, and arrived once more in the region of authentic information. The journey home, which occupied three days, was full of interest, for France was throbbing with 'la guerre' and 'la gloire'; train after train with troops bound for the Front, swept by us; while at Lyons we encountered an ambulance train full of wounded, and another of German prisoners. My party had the advantage of travelling with the wife and son of a Cabinet Minister, and through Sir E. Grey's kind solicitude for his colleague's people, the best possible accommodation was provided for us, but even that powerful interest was not always sufficient to prevent delay and discomfort. On reaching Creil, the junction for Belgium, we found the station full of English troops in their retreat from Mons, and many were the stirring stories gathered from our retiring, but not disheartened men....