With the Guards' Brigade from Bloemfontein to Koomati Poort and Back 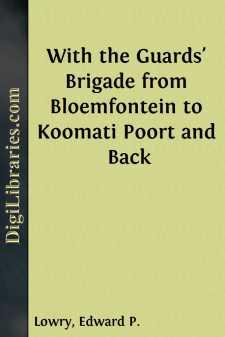 THE ULTIMATUM AND WHAT LED TO IT

When the late Emperor of the French was informed, on the eve of the Franco-German War, that not so much as a gaiter button would be found wanting if hostilities were at once commenced, soon all France found itself, with him, fatally deceived. But when the Transvaal Burghers boasted that they were "ready to give the British such a licking as they had never had before," it proved no idle vaunting. Whether the average Boer understood the real purpose for which he was called to arms seems doubtful; but his leaders made no secret of their intention to drive the hated "Roineks" into the sea, and to claim, as the notorious "Bond" frankly put it, "all South Africa for the Africanders." The Rev. Adrian Hoffmeyer of the Dutch Reformed Church freely admits that the watchword of the Western Boers was "Tafelburg toc," that is, "To Table Mountain"; and that their commandant said to him, "We will not rest till our flag floats there."

Similarly on the eastern side it was their confident boast that presently they would be "eating fish and drinking coffee at sea-side Durban." There would thus be one flag floating over all South Africa; and that flag not the Union Jack but its supplanter.

Now the Dutch have undoubtedly as absolute a right to dream dreams of wide dominion as we ourselves have; and this particular dream had no less undeniably been the chief delight of some among them for more than a decade twice told.

Even President Brand, of the Orange Free State, referring to Lord Carnarvon's pet idea of a federated South Africa, said: "His great scheme is a united South Africa under the British Flag. He dreams of it and so do I; but under the flag of South Africa." Much in the same strain President Burgers, of the Transvaal Republic, when addressing a meeting of his countrymen in Holland, said: "In that far-off country the inhabitants dream of a future in which the people of Holland will recover their former greatness." He was convinced that within half a century there would be in South Africa a population of eight millions; all speaking the Dutch language; a second Holland, as energetic and liberty-loving as the first; but greater in extent, and greater in power.

Nevertheless, in this far-seeing President's day, the Transvaal, after fourteen years of doubtful independence, reached in 1877 its lowest depths of financial and political impotency. Its valiant burghers were vanquished in one serious conflict with the natives; and, emboldened thereby, the Zulus were audaciously threatening to eat them up, when Shepstone appeared upon the scene. "I thank my father Shepstone for his restraining message," said Cetewayo. "The Dutch have tired me out; and I intended to fight with them once, only once, and to drive them over the Vaal." The jails were thrown open because food was no longer obtainable for the prisoners. The State officials, including the President, knew not where to secure their stipends, and were hopelessly at variance among themselves....