With the French in France and Salonika 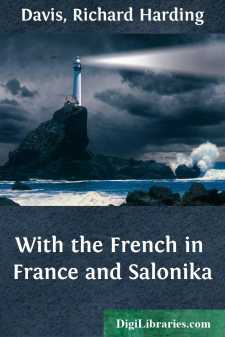 This book was written during the three last months of 1915 and the first month of this year in the form of letters from France, Greece, Serbia, and England. The writer visited ten of the twelve sectors of the French front, seeing most of them from the first trench, and was also on the French-British front in the Balkans. Outside of Paris the French cities visited were Verdun, Amiens, St. Die, Arras, Chalons, Nancy, and Rheims. What he saw served to strengthen his admiration for the French army and, as individuals and as a nation, for the French people, and to increase his confidence in the ultimate success of their arms.

This success he believes would come sooner were all the fighting concentrated in Europe. To scatter the forces of the Allies in expeditions overseas, he submits, only weakens the main attack and the final victory. At the present moment, outside of her armies for defense in England and for offense in Flanders, Great Britain is supporting armies in Egypt, German East Africa, Salonika, and Mesopotamia. No one who has seen in actual being one of these vast expeditions, any one of which in the past would have commanded the interest of the entire world, can appreciate how seriously they cripple the main offensive. Each robs it of hundreds of thousands of men needed in the trenches, of the transports required to carry those men, of war-ships to convoy them, of hospital ships to mend them, of medical men, medical stores, aeroplanes, motor-trucks, ambulances, machine-guns, field-guns, siege-guns, and millions upon millions of rounds of ammunition.

Transports that from neutral ports should be carrying bully beef, grain, and munitions, are lying idle at a rent per day of many hundreds of thousands of pounds, in the harbors of Moudros, Salonika, Aden, Alexandria, in the Persian Gulf, and scattered along both coasts of Africa. They are guarded by war-ships withdrawn from duty in the Channel and North Sea. What, in lives lost, these expeditions have cost both France and Great Britain, we know; what they have cost in millions of money, it would be impossible even to guess.

For these excursions far afield it is not the military who are responsible. There is the highest authority for believing neither General Joffre nor Lord Kitchener approves of them. They are efforts launched for political effect by loyal and well-meaning, but possibly mistaken, members of the two governments. By them these expeditions were sent forth to seize some place in the sun already held by Germany, to prevent other places falling into her hands, or in the hope of turning some neutral power into an ally. It was merely dancing to Germany’s music. It postponed and weakened the main attack. This war should be fought in France. If it is, Germany will be utterly defeated; she cannot long survive such another failure as Verdun, or even should she eventually occupy Verdun could she survive such a victory. When she no longer is a military threat all she possessed before the war, and whatever territory she has taken since she began the war, will automatically revert to the Allies....