With the British Army in The Holy Land 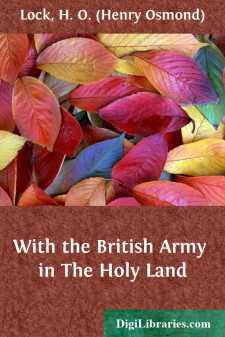 EGYPT AND THE SUEZ CANAL

The Holy Land has been the scene of war since the dawn of History. Long before Belgium became the cock-pit of Europe, Palestine was the cock-pit of the known world. Here, on the high road between Asia and Africa, were fought the great wars of Egyptians and Assyrians, Israelites and Canaanites, Greeks and Romans, Saracens and Crusaders. With these few square miles are associated the names of the world's greatest soldiers no less than that of the Prince of Peace. None can fail to be interested in the latest campaign in this Land of Armageddon.

To understand the causes and events that led up to the campaign in Palestine of 1917-1918, we must first summarize, as shortly as possible, the modern history of Egypt. That country had for many centuries formed an integral part of the Turkish Empire. But she had been rapidly slipping from the grasp of the Turk. Early in the nineteenth century Mohamed Ali had effectually thrown off the Turkish yoke. True, the Turkish suzerainty remained; but that authority was little more than nominal and was represented by an annual money tribute paid to the Porte by the Khedive out of the revenues of Egypt.

Both France and England had large financial interests in Egypt, especially after the construction of the Suez Canal, which was opened for traffic in 1869.

The Suez Canal, in fact, became of vital importance to Great Britain. By a stroke of policy the British Government acquired the shares of the almost bankrupt Khedive, Ismail Pasha, and thus had a holding in the company worth several million pounds. But far more important to Britain was the position of the Canal as the great artery of the British Empire, the most vulnerable point on the short sea route to India. Thus Britain became directly concerned in the affairs of Egypt, in its internal administration to secure peace within, and in its military defence to secure the country in general, and the Canal zone in particular, from invasion by a foreign enemy.

But the affairs of Egypt were in a most unsatisfactory condition. The army was wholly unreliable, and extravagance in high places had brought the exchequer to the verge of bankruptcy. In 1882 matters reached a crisis. A revolution broke out, headed by Arabi Pasha, and the situation looked desperate. Joint naval and military action by Britain and France was proposed, but the French ships sailed away and left Britain with a free hand. The British fleet bombarded the Forts at Alexandria and a military force, based on the Suez Canal, was landed at Ismailia. This force completely defeated the army of Arabi Pasha at Tel-el-Kebir, put down the rebellion, and restored the government of the then Khedive, Tewfik Pasha. But the Khedivial government had been unable to cope with the rebellion single-handed; it had only been restored to power by British arms; it could not hope to retain that power unless continuously backed by the power of Britain.

From this time forward, whether she liked it or not, Britain found herself effectually saddled with the direction of the government of Egypt....