With Steyn and De Wet 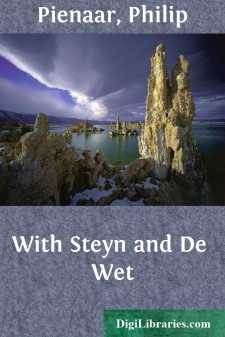 Here in the quiet old convent of Thomar, the Convento de Christo, the strife of the past months seems like a dream. Wandering through the long corridors, with their bare, empty apartments, gazing by the hour on paintings faded and torn, the work of long dead and forgotten masters, dwelling on marvels of ancient architecture, resting the eyes on peaceful landscapes and hearing the sweet murmur of falling waters, the scenes of war seem distant and remote.

The heart but so lately harrowed by the devouring emotions of anger, hate, and the lust of blood, now soothed by the sympathy of the kindly Portuguese, is lulled into harmony with the surrounding scenes of peace and beauty. Only the thought of our ravaged country, struggling still for dear life, though forced upon her knees, brings back the claims of duty and the yearning to be up and doing, to enter once more the ranks of the foemen and strike another blow for liberty.

Hopeless! Yet where is the Boer—prisoner, exile, or renegade—even he!—who does not dream by nights he feels once more the free veld air upon his brow, lives again the wild night rides beneath twinkling stars? He feels once more his noble steed bound beneath him, grips again his comrade's welcoming hand, and wakens with a bitter sigh.

Some consolation, then, to recall blows already struck, and duty fairly done.

THE ELEVENTH OF OCTOBER

When war appeared inevitable the spirit of the Boers rose to support them in their hour of trial, and only sentiments of patriotism and defiance were felt and expressed. Joy at the opportunity of proving once and for ever their ability to defend themselves and consequent right to independence, regret for friendships about to be severed—these were the chief emotions of the younger generation. The elder thought of past wrongs, long cherished, and silently took down the rifle from behind the door.

The women, ever strong in national spirit, lent the aid of their encouragements and prayers. Sons wept that they were too young to accompany their fathers on commando.

Yet there came a moment when for the space of a minute a mighty shadow seemed to brood over the land, and the cold chill of coming evil struck the nation as if from the clouds. A message had been despatched from Pretoria to every corner of the country. One word only: War!

The blow had fallen. Nothing could avert a sanguinary struggle. Well the burghers knew the overwhelming strength of the foe, but they went blithely forth to meet their fate, strong in a sincere confidence in Providence. If the worst came to the worst, well, "'twere better to have fought and lost, than never to have fought at all!"

Of all the branches of the Transvaal Civil Service there was not one that stood higher in the public estimation at that moment, nor one that distinguished itself more during the war, than that to which I had the honour to belong—the Department of Telegraphs. Equipped with the most up-to-date instruments, composed almost equally of picked men from England and Holland and of well-trained young Colonials and Transvaalers, under an energetic chief, our department proved itself, both before and during the war, second to none, and, the Afrikander portion at least, worthy of the confidence of the Government.

I had just been transferred from Johannesburg to Pilgrimsrest, a quaint little one-street village near the Portuguese frontier, one of the oldest alluvial diggings of the early days, and now the centre of an important mining district. Here we heard that our commandoes had invaded the enemy's territory in every direction, and news of the preliminary engagements was awaited with breathless interest. The male inhabitants of the village often spent entire nights under the verandah of the telegraph office, and the importance of the telegraphist suddenly grew almost too great to bear with becoming modesty....