With Our Soldiers in France 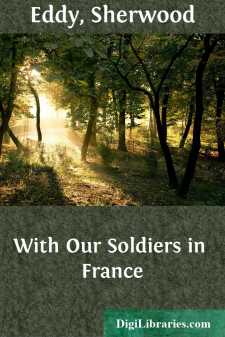 CHAPTER I AT THE FRONT

In the midst of our work at a base camp, there came a sudden call to go "up the line" to the great battle front. Leaving the railway, we took a motor and pressed on over the solidly paved roads of France, which are now pulsing arteries of traffic, crowded with trains of motor transports pouring in their steady stream of supplies for the men and munitions for the guns. Now we turn out for the rumbling tank-like caterpillars, which slowly creep forward, drawing the big guns up to the front; then we pass a light field-battery. Next comes a battalion of Tommies swinging down the road, loaded like Christmas trees with their cumbrous kits, sweating, singing, whistling, as they march by with dogged cheer toward the trenches.

We have crossed the Somme with its memories of blood, on across northern France, and now we have passed the Belgian frontier and are in the historic fields of Flanders, where the creaking windmills are still grinding the peasants' corn, and the little church spires stand guard over the sleeping villages. A turn of the road brings us close within sound of the guns, which by night are heard far across France and along the coasts of England. Soon we enter villages, which lie within range of the enemy's "heavies," with their shattered window glass, torn roofs, ruined houses, tottering churches, and deep shell holes in the streets. Now we are in the danger zone and have to put on our shrapnel-proof steel helmets, and box respirators, to be ready for a possible attack of poison gas.

Another turn in the road, and the great battle field rises in grim reality before us. Far to the left stands the terrible Ypres salient, so long swept by the tide of war, and away to the right are the blasted woods of "Plug Street." Right before us rises the historic ridge of Messines, won at such cost during the summer. We are standing now at the foot of the low ridge where the British trenches were so long held under the merciless fire of the enemy. From here to the top of the ridge the ground has been fought over, inch by inch and foot by foot. It is blasted and blackened, deep seamed by shot and shell. The trees stand on the bare ridge, stiff and stark, charred and leafless, like lonely sentinels of the dead. The ground, without a blade of grass left, is torn and tossed as by earthquake and volcano. Trenches have been blown into shapeless heaps of debris. Deep shell holes and mine craters mark the advance of death. Small villages are left without one stone or brick upon another, mere formless heaps, ground almost to dust. Deserted in wild confusion, half buried in the churned mud, on every hand are heaps of unused ammunition, bombs, gas shells, and infernal machines wrecked or hurriedly left in the enemy's flight.

Here on June 7th, at three o'clock in the morning, following the heavy bombardment which had been going on for days, the great attack began. In one division alone the heavy guns had fired 46,000 shells and the field artillery 180,000 more....