With Manchesters in the East

by Gerald B. (Gerald Berkeley) Hurst 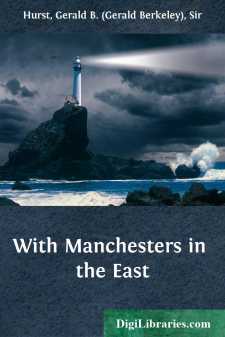 Our Battalion of the Manchesters was typical of the old Territorial Force, whose memory has already faded in the glory of the greater Army created during the War, but whose services in the period between the retreat from Mons and the coming into action of "Kitchener's Men" claim national gratitude.

Their earlier history hardly emerges from parochialism. Founded in 1859 and recruited mainly from the southerly suburbs of Manchester, the Battalion lived through the common vicissitudes of the English Volunteer unit. It knew the ridicule and disparagement of the hypercritical and cosmopolitan, the too easy praise of the hurried inspecting general, the enthusiasm of the camp fire, the chill of the wet afternoon on a wintry rifle range at Crowden. The South African War gave many a chance of active service, and infused more serious and systematic training in the routine of the yearly Whitsuntide camps. At that time everything depended on the Regular officer who acted as adjutant, and officers and men owed much to the inspiring energy of Captain (now Colonel) W.P.E. Newbigging, C.M.G., D.S.O., of the Manchesters, whose adjutancy (1902-1907) meant a great step in their efficiency. The letter "Q," which signifies success in all examinations required by the War Office, figured in the Army List after most of our officers' names during this vivid and strenuous phase. For the rest, the pre-War period turned mainly on the fortnightly camps and occasional Regimental exercises. Salisbury Plain, the Isle of Man, Aldershot and a few North Country areas are full of memories of manœuvre and recreation in a peaceful age. Regimental exercises filled weekends in Cheshire or the West Riding.

Volunteering served many purposes in England. It kept alive in luxurious times a sense of discipline and a cultivation of endurance. Its comradeship brought classes together so closely that the easy relationship between officers and men in the 1st line Territorial unit of 1914-1915 was the despair of the more crusted Regular martinet. Its joyous amateurism freed it from every trace of the mental servitude which is the curse of militarism, and stimulated initiative and individuality. Long before the War, most Territorials believed in universal training, not so much on account of the German peril, which to too many Englishmen seemed a mere delusion, as on account of its social value. It is pleasant to remember how solidly Lord Roberts received local Territorial support when he made the most prophetic of all his speeches in the Free Trade Hall, Manchester, on the 22nd October 1912.

Lord Haldane's conversion of the Volunteers into the Territorial Force of 1907 meant little change in the internal economy or in the personnel of this Battalion. Its mounted infantry company, 140 strong, and its cyclists were lost in the interest of uniformity. Nevertheless, the change made us better fitted for war by incorporating us in the larger Divisional organisation essential in European war....