With Lee in Virginia A Story of the American Civil War 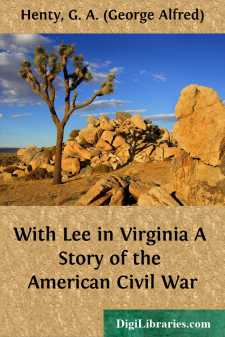 CHAPTER I. A VIRGINIA PLANTATION.

"I won't have it, Pearson; so it's no use your talking. If I had my way you shouldn't touch any of the field hands. And when I get my way—that won't be so very long—I will take very good care you shan't. But you shan't hit Dan."

"He is not one of the regular house hands," was the reply; "and I shall appeal to Mrs. Wingfield as to whether I am to be interfered with in the discharge of my duties."

"You may appeal to my mother if you like, but I don't think that you will get much by it. You are too fond of that whip, Pearson. It never was heard on the estate during my father's time, and it shan't be again when it comes to be mine, I can tell you. Come along, Dan; I want you at the stables."

Vincent Wingfield turned on his heel, and followed by Dan, a negro lad of some eighteen years old, he walked toward the house, leaving Jonas Pearson, the overseer of the Orangery Estate, looking after him with an evil expression of face.

Vincent Wingfield was the son of an English officer, who, making a tour in the States, had fallen in love with and won the hand of Winifred Cornish, a Virginia heiress, and one of the belles of Richmond. After the marriage he had taken her to visit his family in England; but she had not been there many weeks before the news arrived of the sudden death of her father. A month later she and her husband returned to Virginia, as her presence was required there in reference to business matters connected with the estate, of which she was now the mistress.

The Orangery, so called from a large conservatory built by Mrs. Wingfield's grandfather, was the family seat, and the broad lands around it were tilled by upward of two hundred slaves. There were in addition three other properties lying in different parts of the State. Here Vincent, with two sisters, one older and one younger than himself, had been born. When he was eight years old Major and Mrs. Wingfield had gone over with their children to England, and had left Vincent there for four years at school, his holidays being spent at the house of his father's brother, a country gentleman in Sussex. Then he had been sent for unexpectedly; his father saying that his health was not good, and that he should like his son to be with him. A year later his father died.

Vincent was now nearly sixteen years old, and would upon coming of age assume the reins of power at the Orangery, of which his mother, however, would be the actual mistress as long as she lived. The four years Vincent had passed in the English school had done much to render the institution of slavery repugnant to him, and his father had had many serious talks with him during the last year of his life, and had shown him that there was a good deal to be said upon both sides of the subject.

"There are good plantations and bad plantations, Vincent; and there are many more good ones than bad ones. There are brutes to be found everywhere. There are bad masters in the Southern States just as there are bad landlords in every European country. But even from self-interest alone, a planter has greater reason for caring for the health and comfort of his slaves than an English farmer has in caring for the comfort of his laborers. Slaves are valuable property, and if they are over-worked or badly cared for they decrease in value. Whereas if the laborer falls sick or is unable to do his work the farmer has simply to hire another hand. It is as much the interest of a planter to keep his slaves in good health and spirits as it is for a farmer to feed and attend to his horses properly.

"Of the two, I consider that the slave with a fairly kind master is to the full as happy as the ordinary English laborer. He certainly does not work so hard, if he is ill he is carefully attended to, he is well fed, he has no cares or anxieties whatever, and when old and past work he has no fear of the workhouse staring him in the face. At the same time I am quite ready to grant that there are horrible abuses possible under the laws connected with slavery.

"The selling of slaves, that is to say, the breaking up of families and selling them separately, is horrible and abominable....