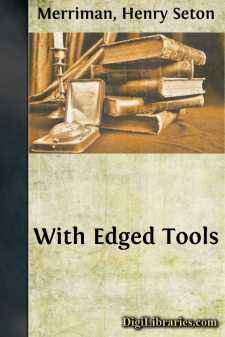 CHAPTER I. TWO GENERATIONS Why all delights are vain, but that most vainWhich with pain purchased doth inherit pain.

"My dear—Madam—what you call heart does not come into the question at all."

Sir John Meredith was sitting slightly behind Lady Cantourne, leaning towards her with a somewhat stiffened replica of his former grace. But he was not looking at her—and she knew it.

They were both watching a group at the other side of the great ballroom.

"Sir John Meredith on Heart," said the old lady, with a depth of significance in her voice.

Sir John smiled with that well-bred cynicism which a new school has not yet succeeded in imitating. They were of the old school, these two; and their worldliness, their cynicism, their conversational attitude, belonged to a bygone period. It was a cleaner period in some ways—a period devoid of slums. Ours, on the contrary, is an age of slums wherein we all dabble to the detriment of our hands—mental, literary, and theological.

Sir John moved slightly in his chair, leaning one hand on one knee. His back was very flat, his clothes were perfect, his hair was not his own, nor yet his teeth. But his manners were entirely his own. His face was eighty years old, and yet he smiled his keen society smile with the best of them. There was not a young man in the room of whom he was afraid, conversationally.

"No, Lady Cantourne," he repeated. "Your charming niece is heartless. She will get on."

Lady Cantourne smiled, and drew the glove further up her stout and motherly right arm.

"She will get on," she admitted. "As to the other, it is early to give an opinion."

"She has had the best of trainings—," he murmured. And Lady Cantourne turned on him with a twinkle amidst the wrinkles.

"Choisissez!" he answered, with a bow.

One sees a veteran swordsman take up the foil with a tentative turn of the wrist, lunging at thin air. His zest for the game has gone; but the skill lingers, and at times he is tempted to show the younger blades a pass or two. These were veteran fencers with a skill of their own, which they loved to display at times. The zest was that of remembrance; the sword-play of words was above the head of a younger generation given to slang and music-hall airs; and so these two had little bouts for their own edification, and enjoyed the glitter of it vastly.

Sir John's face relaxed into the only repose he ever allowed it; for he had a habit of twitching and moving his lips such as some old men have. And occasionally, in an access of further senility, he fumbled with his fingers at his mouth. He was clean shaven, and even in his old age he was handsome beyond other men—standing an upright six feet two.

The object of his attention was the belle of that ball, Miss Millicent Chyne, who was hemmed into a corner by a group of eager dancers anxious to insert their names in some corner of her card. She was the fashion at that time. And she probably did not know that at least half of the men crowded round because the other half were there....