With British Guns in Italy A Tribute to Italian Achievement 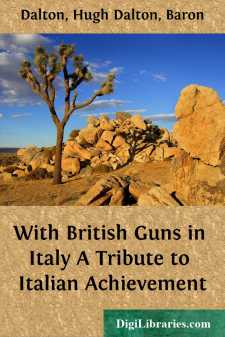 Anglo-Italian friendship has been one of the few unchanging facts in modern international relations. Since the French Revolution, in the bellicose whirligig of history and of the old diplomacy's reckless dance with death, British troops have fought in turn against Frenchmen and Germans, against Russians and Austrians, against Bulgarians, Turks and Chinamen, against Boers, and even against Americans, but never, except for a handful of Napoleonic conscripts, against Italians. British and Italian troops, on the other hand, fought side by side in the Crimea, and, in the war which has just ended, have renewed and extended their comradeship in arms in Austria and Italy, in France and in the Balkans.

During the nineteenth century Italy in her Wars of Liberation gained, in a degree which this generation can hardly realise, the enthusiastic sympathy and the moral, and sometimes material, support of all the best elements in the British nation. There were poetsвЂ”Byron and Shelley, the Brownings, Swinburne and MeredithвЂ”who were filled with a passionate devotion to the Italian cause.[1] There were statesmenвЂ”Palmerston, Lord John Russell and GladstoneвЂ”who did good work for Italian freedom, and Italians still remember that in 1861 the British Government was the first to recognise the new Kingdom of United Italy, while the Governments of other Powers were intriguing to harass and destroy it. There were individual, adventurous Englishmen, such as Forbes, the comrade of Garibaldi, who put their lives and their wealth at the disposal of Italian patriots. But, beyond all these, it was the great mass of the British people which stood steadily behind the Italian people in its long struggle for unity and freedom.

[Footnote 1: Even Tennyson, who was not very susceptible to foreign influences, invited Garibaldi to plant a tree in his garden.]

Mazzini, Garibaldi and Cavour, "the soul, the sword and the brain," which together created Modern Italy, all had close personal relations with this country. Mazzini, driven from his own land by foreign oppressors, lived a great part of his life in exile among us, and here dreamed those dreams, which still inspire generous youth throughout the world. When Garibaldi visited us in 1864, he was enthusiastically acclaimed by all sections of the nation, by the Prince of Wales, the Peerage and the Poet Laureate, no less than by the working classes. It is recorded that, used as he was, as a soldier, to the roar of battle and, as a sailor, to the roar of the storm, Garibaldi almost quailed before the tumultuous roar of welcome which greeted him as he came out of the railway station at Nine Elms. Cavour was a deep student and a great admirer of British institutions, both political and economic, and in a large measure founded Italian institutions upon them. And the first public speech he ever made was made in London in the English tongue. These great men passed in time from the stage of Italian public life, and others took their places, but amid all the shifting complexities of recent international politics, no shadow has ever fallen across the path of Anglo-Italian friendship....