Witch Winnie The Story of a King's Daughter 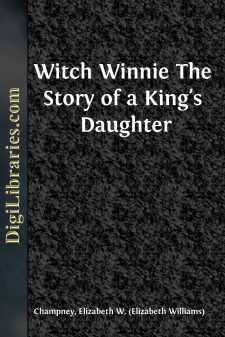 E never had any until Witch Winnie came to room in our corner.

We had the reputation of being the best behaved set at Madame's, a little bit self-conscious too, and proud of our propriety. Perhaps this was the reason that we were nicknamed the "Amen Corner," though the girls pretended it was because the initials of our names, spelled downward, like an acrostic—

formed the word amen. But certainly the name would not have clung to us as it did if the other girls had not recognized its fitness in our forming a sanctimonious little clique who echoed Madame's sentiments, and were real Pharisees in minding the rules about study-hours, and whispering, and having our lights out in time, and the other lesser matters of the law which the girls in the "Hornets' Nest," Witch Winnie's set, disregarded with impunity.

And verily we had our reward, for Madame trusted us, and gave us the best set of rooms in the great stone corner tower, overlooking the park, quite away from the espial of the corridor teacher. They had been intended for an infirmary, but as no one was ever sick at Madame's, she grew tired of keeping them unoccupied, and assigned them to us.

Sometimes the other girls annoyed us by making calls in study-hours, and we virtuously displayed a placard on our door bearing the inscription, "Particularly Engaged." It caught Witch Winnie's eye, as she strolled along the hall, and she scribbled beneath it,

"The girls of the Amen CornerWould have us all to knowThat they're engaged, each one engaged—Particularly so."

This incident is borrowed from an actual occurrence.

We hardly knew whether to be amused or vexed at this sally of Witch Winnie's. We acknowledged that it was bright, but we deplored her wildness, and had no idea how much we should love her in time to come. After all, our reputation as model pupils had a very slender foundation. It rested chiefly on Emma Jane's preternatural conscientiousness. The night that the cadet band serenaded our school, some of the pupils, presumably the girls in the "Hornets' Nest," threw out bouquets to the performers. Rumor said that when Madame heard of this she was greatly shocked.

"I don't see how she can punish them for it," said Adelaide; "there's nothing in the rules about not giving flowers to young men. Still, it was a dreadful thing to do, and Madame is ingenious enough to twist the rules some way, so as to 'make the punishment fit the crime.' I am glad the Amen Corner is guiltless."

Then we marched into chapel on tiptoe with excitement to see Madame wreak vengeance on the wrong-doers. Witch Winnie sat behind me, and turning, I saw that she looked pale, but resolute.

"Young ladies," she exclaimed, in a sharp tone of command, "you may all rise." We rose.

"If you turn to the printed rules of this institution," she continued, "you will find under Section VII. the following paragraph—'Pupils are not allowed to disfigure the lawn by throwing from the windows any bits of paper, hair, apple-parings, peanut shells, or waste material of any kind. Scrap-baskets are provided for the reception of such matter, and any pupil throwing anything from her window upon the school grounds will be regarded as having committed a misdemeanor.'"

An impressive silence followed, in which Witch Winnie gave a sigh of relief, and whispered to Cynthia Vaughn, "We're all right; we didn't disfigure her precious lawn....