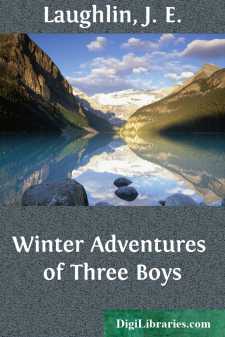 While a wintry storm was raging outside, in the month of November, three happy, excited boys were gathered around the breakfast table in a cozy home in a far North Land.

To those who have not read of the previous doings of these young lads we would say that our heroes were three noble boys from across the sea. They had come out the previous summer from Great Britain by the Hudson Bay Company’s ship and had had several months of most delightful and exciting adventures in the wild North Land. They were the guests of Mr Ross, a retired official in the Hudson Bay Company, who, when his long term of active service in the fur trade had ended, had preferred remaining in the country rather than returning to any other land. During the many years he had traded with the Indians he had ever been on the most friendly terms with them. He had observed so many noble traits and characteristics in them that he and his family preferred spending the greater portion of each year surrounded by them. Then the quiet charm of such a life had more attraction and a greater fascination for them than the rush and worry and demands of our so-called highest civilisation.

Mrs Ross was a native Indian woman, but, like many other wives of Hudson Bay officials, was a highly educated woman. The years spent in foreign lands at the best of schools had not spoiled her. She was beloved and honoured by all who knew her, and she was indeed a benediction and a blessing among the poor of her own people.

The musical and expressive Indian names of Minnehaha and Wenonah had been given to the two bright, winsome little girls in the household, while the wee brother was called by the old Scottish name of Roderick.

Cordially had Mrs Ross, with her husband, welcomed the three boys, who at their special request had come out to be their guests, or rather, more correctly, to be loved members of their own household, for at least twelve months in that land. Sagasta-weekee, the house full of sunshine, was the beautiful Indian name given to the cozy, comfortable house which Mr Ross had built for himself and household. It was a delightful home, well furnished with everything essential to the enjoyment and comfort of all its inmates.

We need not here repeat all that has been previously mentioned about the three heroes of our story. Suffice it to say that Frank, the eldest, was the son of an English banker; Alec was a genuine Scottish lad, while Sam was a jolly Irish boy. They had a splendid trip across the ocean, and had met with varied adventures while on the long journey up the rivers and across the portages between York Factory, on the Hudson Bay, where they had landed, and Norway House, where they had been welcomed by Mr Ross.

The summer and autumn months had been full of wonderful and exciting trips and adventures. Their last excursion, which had so recently ended, had been one of great pleasure and intense excitement. It had been made in canoes to a distant part of the country where reindeer and other large game abounded....