Winning a Cause World War Stories 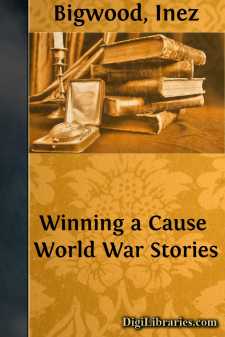 Lest We Forget, the first volume of World War stories, gave an outline of the struggle up to the time of the signing of the armistice, November 11, 1918, and contained in general chronological order most of the stories that to children from ten to sixteen years of age would be of greatest interest, and give the clearest understanding of the titanic contest.

This; the second volume of the same series, contains the stories of the war of the character described, that were not included in Lest We Forget,—stories of the United States naval heroes, of the Americans landed in France, of the concluding events of the war, of the visit of President Wilson to Europe, and of the Peace Conference. In a word, emphasis is placed upon America's part in the struggle.

This volume should be of even greater interest to American children than the first, for it tells the story of America's greatest achievement, of a nation undertaking a tremendous and terrible task not for material gain, but for an ideal.

No more inspiring story has ever been told to the children of men than the story of America's part in winning the greatest cause for which men have ever contended. President Wilson said in Europe, "The American soldiers came not merely to win a war, but to win a cause." Every child in every home and in every school should be made familiar with how it was won, and with the separate stories which go to make up the glorious epic.

The two volumes of the series give for children, in a way that they will comprehend and enjoy, through stories so selected and so connected as to build up an understanding of the whole, the causes, the conduct, and the results of the World War.

The thanks of the authors and publishers are hereby expressed to Mr. Edwin Rowland Blashfield for the permission to reproduce his poster, "Carry On"; to Mrs. Ella Wheeler Wilcox for "Song of the Aviator"; to George H. Doran Company, Publishers, for "Pershing at the Tomb of Lafayette" from "The Silver Trumpet," by Amelia Josephine Burr, copyright 1918; for "Where Are You Going, Great-Heart?" from "The Vision Splendid" by John Oxenham, copyright 1918; for "Trees" from "Trees and Other Poems" by Joyce Kilmer, copyright 1914; to Collier's for Lieutenant McKeogh's story of "The Lost Battalion"; to Mr. Roger William Riis for his article "The Secret Service"; and to Mr. John Mackenzie, Chief Boatswain's Mate, U. S. S. Remlik, for the facts in the story, "Fighting a Depth Bomb."