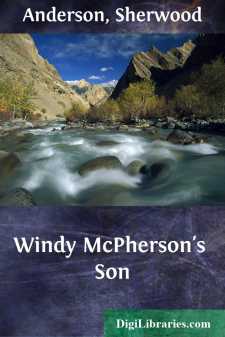 BOOK I CHAPTER I

At the beginning of the long twilight of a summer evening, Sam McPherson, a tall big-boned boy of thirteen, with brown hair, black eyes, and an amusing little habit of tilting his chin in the air as he walked, came upon the station platform of the little corn-shipping town of Caxton in Iowa. It was a board platform, and the boy walked cautiously, lifting his bare feet and putting them down with extreme deliberateness on the hot, dry, cracked planks. Under one arm he carried a bundle of newspapers. A long black cigar was in his hand.

In front of the station he stopped; and Jerry Donlin, the baggage-man, seeing the cigar in his hand, laughed, and slowly drew the side of his face up into a laboured wink.

Sam stepped to the baggage-room door, handed him the cigar, and began giving directions, pointing into the baggage-room, intent and business- like in the face of the Irishman's laughter. Then, turning, he walked across the station platform to the main street of the town, his eyes bent on the ends of his fingers on which he was making computations with his thumb. Jerry looked after him, grinning so that his red gums made a splash of colour on his bearded face. A gleam of paternal pride lit his eyes and he shook his head and muttered admiringly. Then, lighting the cigar, he went down the platform to where a wrapped bundle of newspapers lay against the building, under the window of the telegraph office, and taking it in his arm disappeared, still grinning, into the baggage-room.

Sam McPherson walked down Main Street, past the shoe store, the bakery, and the candy store kept by Penny Hughes, toward a group lounging at the front of Geiger's drug store. Before the door of the shoe store he paused a moment, and taking a small note-book from his pocket ran his finger down the pages, then shaking his head continued on his way, again absorbed in doing sums on his fingers.

Suddenly, from among the men by the drug store, a roaring song broke the evening quiet of the street, and a voice, huge and guttural, brought a smile to the boy's lips:

"He washed the windows and he swept the floor,  And he polished up the handle of the big front door.  He polished that handle so carefullee,  That now he's the ruler of the queen's navee."

The singer, a short man with grotesquely wide shoulders, wore a long flowing moustache, and a black coat, covered with dust, that reached to his knees. He held a smoking briar pipe in his hand, and with it beat time for a row of men sitting on a long stone under the store window and pounding on the sidewalk with their heels to make a chorus for the song. Sam's smile broadened into a grin as he looked at the singer, Freedom Smith, a buyer of butter and eggs, and past him at John Telfer, the orator, the dandy, the only man in town, except Mike McCarthy, who kept his trousers creased. Among all the men of Caxton, Sam most admired John Telfer and in his admiration had struck upon the town's high light....