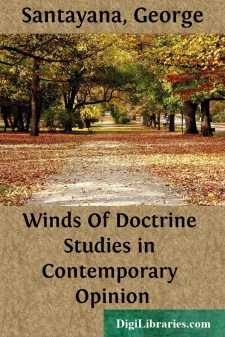 I THE INTELLECTUAL TEMPER OF THE AGE

The present age is a critical one and interesting to live in. The civilisation characteristic of Christendom has not disappeared, yet another civilisation has begun to take its place. We still understand the value of religious faith; we still appreciate the pompous arts of our forefathers; we are brought up on academic architecture, sculpture, painting, poetry, and music. We still love monarchy and aristocracy, together with that picturesque and dutiful order which rested on local institutions, class privileges, and the authority of the family. We may even feel an organic need for all these things, cling to them tenaciously, and dream of rejuvenating them. On the other hand the shell of Christendom is broken. The unconquerable mind of the East, the pagan past, the industrial socialistic future confront it with their equal authority. Our whole life and mind is saturated with the slow upward filtration of a new spirit—that of an emancipated, atheistic, international democracy.

These epithets may make us shudder; but what they describe is something positive and self-justified, something deeply rooted in our animal nature and inspiring to our hearts, something which, like every vital impulse, is pregnant with a morality of its own. In vain do we deprecate it; it has possession of us already through our propensities, fashions, and language. Our very plutocrats and monarchs are at ease only when they are vulgar. Even prelates and missionaries are hardly sincere or conscious of an honest function, save as they devote themselves to social work; for willy-nilly the new spirit has hold of our consciences as well. This spirit is amiable as well as disquieting, liberating as well as barbaric; and a philosopher in our day, conscious both of the old life and of the new, might repeat what Goethe said of his successive love affairs—that it is sweet to see the moon rise while the sun is still mildly shining.

Meantime our bodies in this generation are generally safe, and often comfortable; and for those who can suspend their irrational labours long enough to look about them, the spectacle of the world, if not particularly beautiful or touching, presents a rapid and crowded drama and (what here concerns me most) one unusually intelligible. The nations, parties, and movements that divide the scene have a known history. We are not condemned, as most generations have been, to fight and believe without an inkling of the cause. The past lies before us; the history of everything is published. Every one records his opinion, and loudly proclaims what he wants. In this Babel of ideals few demands are ever literally satisfied; but many evaporate, merge together, and reach an unintended issue, with which they are content. The whole drift of things presents a huge, good-natured comedy to the observer. It stirs not unpleasantly a certain sturdy animality and hearty self-trust which lie at the base of human nature.

A chief characteristic of the situation is that moral confusion is not limited to the world at large, always the scene of profound conflicts, but that it has penetrated to the mind and heart of the average individual. Never perhaps were men so like one another and so divided within themselves. In other ages, even more than at present, different classes of men have stood at different levels of culture, with a magnificent readiness to persecute and to be martyred for their respective principles. These militant believers have been keenly conscious that they had enemies; but their enemies were strangers to them, whom they could think of merely as such, regarding them as blank negative forces, hateful black devils, whose existence might make life difficult but could not confuse the ideal of life. No one sought to understand these enemies of his, nor even to conciliate them, unless under compulsion or out of insidious policy, to convert them against their will; he merely pelted them with blind refutations and clumsy blows. Every one sincerely felt that the right was entirely on his side, a proof that such intelligence as he had moved freely and exclusively within the lines of his faith. The result of this was that his faith was intelligent, I mean, that he understood it, and had a clear, almost instinctive perception of what was compatible or incompatible with it....